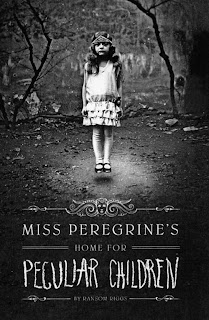 Sixteen-year-old Jacob has grown up hearing his grandfather's fantastical tales about the peculiar children residing with him in the orphanage where he lived as a child. One could levitate, one had inhuman strength, one could produce fire with her hands. As Jacob grew up he realized the stories must have been tall tales. But when his grandfather dies suddenly after whispering some cryptic last words to Jacob, he realizes there may be truth to the stories after all.

Jacob and his father journey to Wales so Jacob can find closure in his grandfather's death by visiting the ruins of the bombed-out orphanage. But really he is searching for the other children from the orphanage, using only clues from his grandfather's dying words and a 15-year-old letter from the orphanage's mistress, Miss Peregrine. Of course Jacob finds more than he bargained for. Told in a mixture of text and photographs, the book is a work of art. The photos are all real, assembled by Riggs from various collectors of vintage photos, and the page numbers have fancy little graphics around them.

It was a good story, though I wasn't drawn in as much as I had hoped. I liked the characters and the story and I loved the creepy package. I don't think I'll read the sequel, but I'm still glad I took the time for this unusual book. Riggs is a talented and creative writer and although I wasn't grabbed by the novel, many people have loved it. I recommend giving it a try - at least look at the pictures.