What You See in the Dark 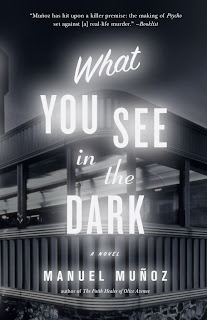 In the late 1950s an actress and a director come to Bakersfield California looking for the perfect motel for their movie. That perfect motel - which they ultimately aren't given permission to use - is owned by Arlene Watson, a waitress at the local diner, and single mother of a young man named Dan who is much admired by the local ladies. But not all is peaceful in this sleepy little town, and one day Dan's Mexican girlfriend is dead and Dan has left town.

I almost didn't make it past the first chapter, and surely would have put it down if I weren't reading it for my book group. The first (and last) chapter was written in second person, to a co-worker of the murdered girl. But that wasn't very clear and I still don't understand why this choice was made. I found it incredibly confusing and disorienting.

Otherwise it was a well-crafted story, and I found myself re-reading a few sentences here and there to savor his choice of words. This atmospheric novel is the first from Muñoz, who has two short story collections to his credit. Moody and noir-feeling, the style in some ways echoed the Hitchcock film that serves as it's backdrop.

I'll admit I didn't care much for this novel. Once I got past the first chapter, the straightforward third person perspective was much easier to read, but the book is simply not to my taste. Dark and slow-moving, there is a certain amount of distance between the reader and the characters. Aside from Arlene, with whom we spent a great deal of time, we barely scratch the surface of what is going on with the characters, and have few facts about what is happening. It wasn't my kind of book, but if you like that sort of atmospheric novel where the details are hazy but the mood is strong, this may be up your alley.
Posted by 3goodrats at 8:15 AM

Labels: books, manuel munoz, reviews, what you see in the dark