The Night Strangers by Chris Bohjalian (2011) 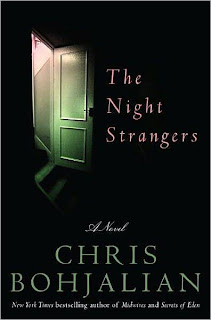 I live in an old house and there is a part of the basement we refer to as "scary basement." It's separated from the main part of the basement, lower-ceilinged, and I joke that that's where the previous inhabitants used to hide the bodies. This no longer seems so funny.

In Chris Bohjalian's new novel, Chip Linton moves to Bethel, NH with his wife and twin daughters. In the basement of their big old house, Chip discovers a mysterious door fixed shut with 39 carriage bolts. Coincidentally, 39 is also the number of passengers who died when Chip was forced to land his plane on Lake Champlain just months before. It was the guilt and grief from that accident that drove Chip and his family to Bethel, but now in their new house he is more haunted than ever by the dead passengers.

Their eccentric new neighbors, who all seem to be named after herbs, seem strangely interested in the couple and especially their 10-year-old daughters, Hallie and Garnet. Although the herbalists ostensibly want to be friends, they begin to look a little sinister to the already-vulnerable family. Chip's strange visions become more real and more threatening than ever, as Emily and the twins are drawn further into the group of herbalists.

This is quite a departure for Bohjalian, but he pulls it off quite effectively. It begins with the creepy basement, but that becomes the least of the family's worries. Though the story starts off slowly, you begin to see things taking shape and as the suspense builds, the pace speeds up. I'm not a very fast reader but I flew through this book - admittedly, I didn't want to put it down but when I sat down to read, I read more pages than I would have expected.

The thing is, you really want everything to go well for this family. They've been through a lot, you've gotten to know them, and you want to protect them from harm. As a reader, of course, all you can do is watch them succumb to powerful forces and hope they have the strength to pull themselves out. The Night Strangers is a gripping novel that made me incredibly tense. I recommend reading it, but be sure to stock up on your anti-anxiety meds.