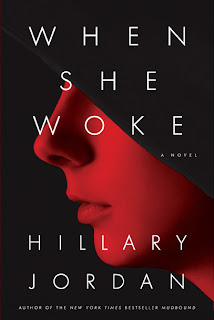 In a slightly different United States than we all know, Hannah Payne has been arrested for having an abortion. As her punishment, she has been injected with a virus that turns her skin bright red. She must live this way for the next 16 years. Her punishment would have been less had she named the man who got her pregnant, or the man who performed the abortion, but she refused. She is still in love with the married pastor with whom she had an affair, and didn't want to reveal his indiscretion, thus destroying the faith her family - and many others - have in him. Now she has been released and she's an outcast who can't return to anyone who cares for her, or at least used to care.

This world Hillary Jordan has created is not so far-fetched. After a breakout of what is euphemistically called "the great scourge" but is in fact a very powerful form of gonorrhea, many women have become barren and the birthrate plummeted. In response, the government passed Sanctity of Life laws which were designed to encourage more procreation by, among other things, outlawing abortion. Control was in the hands of religious zealots and religion became ingrained in every aspect of life. Prisons became so overcrowded that the conditions were widely considered inhumane and an alternative was found in melochroming, the process through which Hannah was turned red. Different colors were chosen for different levels of crime and thus, an entire class of untouchables was created.

This new feminist dystopia is much more than science fiction - it asks many questions about prejudice, loyalty, faith, courage and strength. Hannah began as a very sheltered young woman on a narrow path, but once she stepped off just a bit, the consequences change her whole life. There is a vast gulf between her former life, which is shown in flashback, and her new reality. She learns a lot about herself and she is tested over and over.

The only flaw is that Hannah mentions a few times that she was upset about the abortion and felt like she was a bad person for having done it (even though she stood by her decision), but I didn't really see that come through. She didn't frequently think about the abortion, or speculate on what life would have been like with a baby, or even express doubt about the decision. I think someone who actually regretted an abortion would think about these things a whole lot.

Hannah was an otherwise well developed character who took responsibility for her choices and went through a huge transformation throughout the novel. Not just through the experiences of her punishment, but also through the people she met who she never would have crossed paths with in her cloistered life, and their views and opinions which were very different from those in her narrow-minded community.

The society was fascinating, and just close enough to reality to be possible, and that makes it especially scary. But within this framework there's a great story arc as well, taking us from the solitary ward where Hannah woke up after her procedure, to a rigidly strict sort of recovery house, followed by a dangerous and complicated attempt to leave the country. Hillary Jordan has crafted a story that makes us want to keep reading, and want Hannah and her friends to survive. It kind of knocked my socks off.