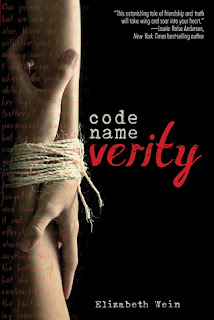 A British spy plane has been shot down, the pilot presumably killed and the passenger captured by the Gestapo. After being tortured she finally relented to making a deal and promised to tell them everything she knew. This is her confession.

The narrator begins by saying that she's a coward. That she's going to be killed in two weeks anyhow but has sold her information to prevent torture that is too frightening to think about. Then she goes on to tell a story about two young women from different walks of life who meet during the war and become best friends and eventually are thrown together on a dangerous mission.

The narrator describes herself in the third person in her confession, which was a bit difficult to get used to, but other than that it was easy to read, conversational and not at all how I'd expect an actual confession to be written (and thank goodness for that). The narrator was called by several different names in the course of the book and maybe it's this masking of identities that made me feel like I never really knew her very well. It didn't diminish the effect of the story at all though, especially since I got a much clearer picture of her pilot friend Maddie. Maddie gets a turn at narrating later on, but I don't want to reveal much about the later part of the story. But I was glad to finally hear from her, especially after learning so much about her from her friend's perspective earlier in the book.


I almost gave up 80 or 90 pages into it, because it wasn't grabbing me. I think I had just been reading it in fits and starts and was a bit put off by all the discussions of planes and whatnot. And then we got hit with a blizzard and I sat down with it for an hour or so, and I am so glad I gave it another shot.

It's hard to say actually what is so fantastic about this book. Partly it's just the perspective - the British experience of World War II, but also British women in the military. Planning spy missions! Caught by the Gestapo! The whole worldview of the two women, their experiences and fears, are so different from anything else I've read about this period that I had to keep reminding myself it's the same World War II I've read about before. I probably wouldn't even have picked this up based only on the description. My interest was piqued by the many rave reviews, which were well deserved.
Posted by 3goodrats at 11:08 AM