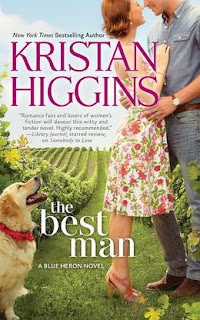 Nothing can be as humiliating as being jilted at the altar, especially by a guy you thought was in love with you but who turns out to be gay. Faith Holland didn't wait around afterwards, but high-tailed it out of town and made a life for herself in San Francisco. But three and a half years later she has returned to upstate New York to do some work at her family's vineyard. Of course that means facing her ex-fiance again, not to mention his best friend - who Faith blames for everything - Levi Cooper. Unfriendly police chief Levi, who has always disliked Faith and makes no attempt to hide it and who is suddenly, strangely, compelling. How has she never noticed how attractive he is?

I picked up a Kristan Higgins book not long, an older book called Just One of the Guys. It was terrible. It read like something written by a twelve-year-old. With lots of exclamation points! In every paragraph! And "bleeping" used as a swear word, repetitively. But since I kept hearing how good Higgins is, I decided to try this forthcoming novel which will be published later this month. I'm glad I gave her a second chance.

Her language has improved greatly since that earlier book, but it's still homey and super-casual, like an email from a friend. Sometimes this extends to barroom language that's a bit jarring; I was ok with the use of "boobage" thought it was overused, but cringed when she used (more than once) "mighty rack." Nonetheless, the writing was generally easy to read, breezy and friendly and funny. I really liked her brand of humor, even it was a bit over-the-top at times. There were some scenes that actually made me snicker and I've been dying to share them with someone but don't want to ruin it by my terrible retelling. I'll just say there's a memorable scene in a bar bathroom that involves a Microfiber Slim-Nation undergarment, a powerful "child-sucking" toilet, and a doomed sweater. The book may be worth reading for this alone. But if that's not enough, there's also a really uncomfortable conversation between Faith and her ex regarding their old sex life and Justin Timberlake. You may not want to miss these things.

There was more subtle humor as well - of a variety I especially appreciate - in Faith's description of wine. Eons ago I visited many wineries and participated in tastings where I was subjected to wine talk that I find pretentious and ridiculous beyond words. In the novel Faith says it's all made up anyhow, and goes on to creatively describe wines thusly: "Passionfruit, pepper, a little honeysuckle, just a touch of pencil lead in the body, with a whisper of lychee in the finish." I love that. It's that sort of talk that finally made me realize I don't enjoy "tasting" wine, I enjoy drinking it.

The Blue Heron Winery was a pleasant backdrop, and Faith's family were charming and quirky. The story of Faith, her sisters, and their mother's death was an unexpectedly sophisticated addition. Faith was epileptic,  a seizure the apparent cause of the car accident that killed her mother when Faith was 10. She had felt guilty about this for years, and how she finally came to grips with it and spoke of it to her family was bittersweet and quite touching. Levi was also a complicated character, greatly affected by his time in the military in Afghanistan and his brief marriage to a woman he met there.

There was really a lot going on here for a romance novel. It's not high literature by any means, but there's a lot to like. I've been striking out a lot on contemporary romance and The Best Man has given me hope for the genre.

I received my copy of The Best Man courtesy of NetGalley
Posted by 3goodrats at 9:00 AM