The Astonishing Life of Octavian Nothing, Traitor to the Nation Volume 1: The Pox Party by M.T. Anderson 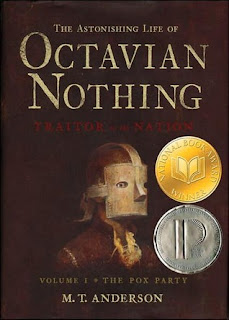 Octavian and his mother Cassiopeia are royalty. They live at the College of Lucidity where they study and play music and dress in fine silks. The others are each known by a number, only Octavian and his mother are called by their names. It is only as Octavian gets older that he notices that those running the College all have light skin and and others who have dark skin like Octavian are not treated well. He begins to question the way his bodily functions are recorded in detail. He stumbles into a forbidden room in the College and his world shifts. As the pictures opens up a bit wider, we see Boston leading up to the Revolution and Octavian suddenly becomes involved.

Most of the story is attributed to Octavian's own accounts of his life, but later on there's a long portion from an account by a soldier. Octavian's language is quite lofty, as befits one who is receiving a classical education. It's tougher to read than YA narration usually is, but not nearly as difficult as the soldier's passages. Oh, that was rough to get through!

"O Fruition, dear Sis, the Spirit of Liberty stirs the Countryside like Sap, & everywhere I am sensible of the Blossoms."

All the &'s and inappropriate capitalizations are just maddening. I can appreciate the historical accuracy of that style but it is incredibly unpleasant to read.

In addition to capturing the feel and writing style of that era, the book deserves big bonus points for a number of other reasons. First, a non-white male protagonist : yes, please. Young Adult fiction is teeming with blond young women, the guys and people of color all too rare. Second, Revolutionary-era Boston! I live in the area, so it's of special interest, but those particular events in our history resonate with many Americans.

Having said all that, Octavian Nothing was a book I appreciate much more than I enjoyed. Octavian's story was compelling on some level, but I found it really difficult to relate to his character because we didn't really have access to his thoughts, his inner life, but only to what was happening to him. However, I read this for a book group and I'm very much looking forward to hearing what others thought of it - I think there's a great deal of fodder for discussion.
Posted by 3goodrats at 2:30 PM