My Sister Lives on the Mantelpiece

My Sister Lives on the Mantelpiece by Annabel Pitcher (2012), narrated by David Tennant 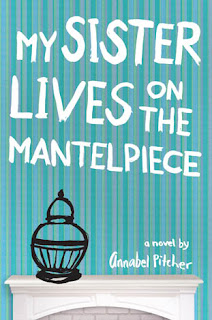 Jamie was just five years old when his sister Rose was killed in a terrorist bombing. Now ten, he lives with his dad and his sister Jasmine, Rose's twin. Months ago his mother left for another man and the rest of the family had to move to a new house. Jamie's father drinks way too much and pays more attention to the urn of Rose's ashes than to his still-living children. He raves against Muslims, who he holds responsible for her death, and gets angry when he doesn't think Jamie affords Rose the attention and respect she deserves. But Jamie barely remembers Rose, never mind missing her or feeling sad about her death. Of course he won't tell his father that. Neither will he tell his father that the only friend he's made at his new school is Muslim.

Desperate for his mother's attention, Jamie attributes her continued absence to her boss Mr. Walker not letting her have time off. When he receives a birthday package from her with a Spider-Man shirt, he wears it all the time. His persistent optimism is so sad! His sister Jasmine is older and more grounded in reality, but doesn't want to dash Jamie's illusions. Their fierce loyalty toward one another was the very best part of the book.

I knew Jamie would learn a lot of painful truths in the course of the story, but he also gained a great deal of strength and confidence, thanks in no small part to his sister Jasmine and his fearless friend Sunya.

The audiobook is brilliant narrated by David Tennant. I was a bit dubious at first: a middle-aged man performing a first-person narration of a 10-year-old boy? But he captures Jamie's exuberance and humor just perfectly. (It also doesn't hurt that I just like listening to British people talk.) The musical interludes between each chapter were unnecessary and a little too long, but even that couldn't detract from the excellent production.

A really lovely, sweet book about family and friendships and growing up. The audiobook isn't available at libraries in my area (I got it from audible.com) but it's absolutely worth seeking out.
Posted by 3goodrats at 9:25 AM