And When She Was Good

And When She Was Good by Laura Lippman (2012), narrated by Linda Emond 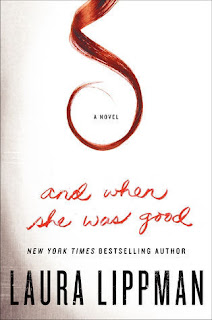 Heloise has it all: a big house, expensive car, perfect son, and a successful business. One day, while in line for a latte at Starbucks, she hears that a suburban madam has died, apparently of suicide. But it's not as simple as it seems, and neither is Heloise. Her lobbying firm is in fact a cover for an escort service and though she has been careful over the years to make sure she and her girls are protected, suddenly everything seems like it may begin to unravel.

Most summaries of this novel contain a lot more information, but it's best if you know little going into it because Heloise's past - and much of her present life - is revealed slowly over the course of the novel. In fact, although I knew that Lippman was a crime writer (I've read two of her other books), this didn't even seem like a crime novel most of the way through, more like a novel about Heloise and how she came to be a madam. Which is fine, because it was fascinating to read about how she ran her business to look legitimate - she filed taxes and everything - and how she kept that side of her life so separate from her life with her son.

Heloise's childhood and young adulthood - during which she was known as Helen - were troubled, to put it mildly, and she was still haunted by her cruel father and the other men who mistreated her. But she emerged strong and hard and capable. It's sad though, as she has had little contact with men who aren't horrible (except professionally, and they paid money for that bit of intimacy), and she isolated herself even from potential friends. I like to think these things changed for her later.

I should mention the narrator - I barely thought of her at all, which is a testament to her expertise. Worthy of mention is her portrayal of Heloise's assistant, Audrey, who is hearing-impaired. Her voice was convincing in its subtle tone sounding much, but not exactly, like someone who is deaf. I would think it's difficult to get it right without overdoing it, and Emond succeeded at that.

This is the third book I've read by Laura Lippman, and each one has been just as good as the last. She is quickly becoming one of my favorites.
Posted by 3goodrats at 9:00 AM

Labels: and when she was good, books, crime, fiction, laura lippman, reviews