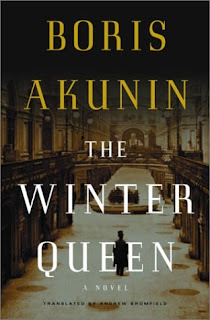 One day in 1876, a young man walked up to a young lady in a park and asked her (what did he ask her?) while brandishing a gun and when she refused him, he shot himself in the head. Simple suicide? Maybe, but Erast Fandorin doesn't think so. Twenty years old and just a (rank) he sees something more and is eager to get to the bottom of the mystery. Of course the apparent suicide in the park is just the tip of the iceberg and Fandorin is soon pursuing a large and mysterious conspiracy.

I found a lot to like in this novel, not the least of which is that Russia is one of my favorite settings. As an added bonus, there was a great deal of dueling. Dueling! But of a very different kind than you might think. The opening scene was one of the best in the book and drew me in instantly and I easily carried along on the casual and easy style.

A minor quibble is that Fandorin's romantic interest was a completely throwaway character; calling her two-dimensional would be generous. Fandorin was smitten the moment he saw her, and I just never care about these shallow romances no matter how much they may insist upon their undying love. But I didn't find this relationship important enough for it to bother me much.

My main problem was with Fandorin himself, who I found be rather an idiot. This was his first case and still wet behind the ears, he regularly made bumbling mistakes with dangerous consequences. It's unlikely he would have come out alive. For instance, there is a situation in which he has learned of somebody's dastardly deeds and that person starts telling him all about the things they have done. This should set off warning bells. Instead, Fandorin actually says "Why are you being so frank with me? Surely you do not hope to win me over to your camp?" I wanted to smack him.

Despite his apparent stupidity, Fandorin still held some appeal. Young and eager, one can sympathize with an orphan who wants to rise above his station and solve crimes. I can only assume he will learn from his mistakes and grow as a character as he takes on more cases in future books. The Winter Queen is the first in a series and I was surprised to see more loose ends than in any mystery I've read. I can only presume these threads will be followed in future books in the series.
Posted by 3goodrats at 9:00 AM