A World Away by Nancy Grossman (2012), narrated by Jessica Lawshe 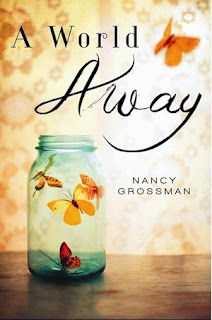 Eliza has finally reached the age of sixteen, when Amish teenagers get to run wild. She has always wanted to leave her district and visit the English world where she could wear jeans and listen to music and experience all sorts of new things. Her parents are not very open to this idea, but eventually they allow her to travel from Iowa to Chicago to be a nanny for the summer. Eliza is hungry to see and do everything in this new world, but ultimately she must make a difficult choice - stay out in the large world with all its freedoms and complications, or return to the simple ordered life she has always known.

The best part about this book was getting to know the ways of the Amish people at the beginning and then traveling with Eliza to Chicago and experiencing so many new things along with her. Her first ride in a car, her first phone call, her first jeans, makeup, learning how to use a computer. And did I mention that there's a boy? Of course there's a boy. His name is Josh and he and Eliza start as friends but it predictably becomes more, making her ultimate choice that much more difficult.

While living in Chicago, Eliza slowly learns more about her mother's time out in the world when she was young. She also gets in touch with someone from her mother's past and learns secrets her family has been keeping for years. I really enjoyed her relationships with all the adults in her life and how they developed, in addition to the more complicated and drama-prone friendships with her peers.

Eliza is what I can only think of as wholesome (and I mean that in the best way possible.) Fresh-faced and polite, she really does want to do the right thing and as far from home as she is, she still retains reverence for Amish ways. I found her outlook extremely refreshing in some ways. For instance, one evening not long after she begins living in Chicago she is getting ready to go out with Josh. When she's all dressed up to go, she looks into a mirror and thought to herself "I am pretty!" This isn't a sentiment we usually hear from teenage girls, most of whom have learned to focus only on what they perceive as their faults. We could really learn some things from the Amish.

There is a point late in the book where she became disillusioned with the English world because of a bad experience after a dance she attended with friends. She made some mistakes and bad choices and had to deal with the extremely unpleasant consequences. It was strange because she was finally able to make decisions on her own, yet when she had to take responsibility for those decisions her reaction seemed to be targeted at the English world. But there are always those who prefer strict order to keep themselves in line, I guess. It was just an interesting way to look at freedom and responsibility and keeping your wits about you. I thought maybe there were too many complications thrown in late in the story when she was trying to make her decision, but ultimately I found the ending satisfying.

I enjoyed this book from beginning to end. I'm a little fascinated by the Amish and other old-timey people so I was naturally drawn to this story. Much like The Sweetheart of Prosper County, I found it a refreshing change from dystopia/paranormals and the sort of realistic fiction riddled with school shootings and drug problems. I like all those books well enough, but I also like books where the problems are more of the everyday sort, and they can be hard to find.

The narrator, Jessica Lawshe, had an appropriately warm and earnest voice, as I would imagine Eliza had. Because the story was fairly simple, it was pleasant and relaxing to listen to on my daily commute. (If you pick up a paper copy just ignore this horrible cover.) I'd recommend this story to anyone who likes young adult books, and it's totally appropriate even for pre-teens. It's a shame it's not available at any libraries in my system, but it's absolutely worth the price of purchase.
Posted by 3goodrats at 9:23 AM