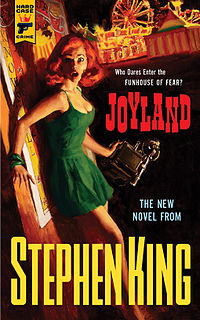 In the summer of 1973 Devin Jones has a broken heart and a job at an amusement park called Joyland. A few years earlier a young woman was murdered on a ride called Horror House, and the killer was never caught. But visitors sometimes report seeing the ghost of the victim, and Devin hopes he'll get to see her too. In the meantime, he's busy dressing up in a furry dog suit and entertaining toddlers while mulling over the strange predictions of park psychic Madame Fortuna. When he befriends a local mom and her sick little boy, and then begins putting together the pieces of that old murder...well, his lost love doesn't seem like much of a problem in comparison.

Published by Hard Case Crime (with that fantastic pulpy cover!) this is a bit of a departure for King. It's not horror, but it's also not a typical whodunnit. There are moments that required a suspension of disbelief, and a couple of small plot points that seemed just a tiny bit contrived, but I didn't care. Everything else was so very real.

Stephen King is just brilliant at creating characters that seem like they could walk off the page. Their insecurities, childhood memories, and fears all come together to form a person you're pretty sure you might have met. Everything about the amusement park was tangible too, right down to "the Talk," the specialized carny lingo.

Joyland is a perfect book for summer: the rides, the kite-flying, the horrible carnival food, the way that Devin was on vacation from his real life. And though it wasn't scary, I found it wonderfully suspenseful. I'm sure it would be great any time of year, but I'm so glad I read it now. In addition to its other summery qualities it's short and paperback, making it a great choice to take to the beach or on vacation.
Posted by 3goodrats at 10:09 PM