This is my first update in a while, not because I haven't been knitting but because my knitting has been uninteresting. "I got two more inches done on the body of x sweater - looks just like the previous two inches!" Nobody wants to see that.

Then earlier this week I began a new pair of socks. I had to just throw out two pairs that I refuse to darn again - as much as I liked the socks - so now I feel like I'm behind in socks. I know it's not a competition. But still. 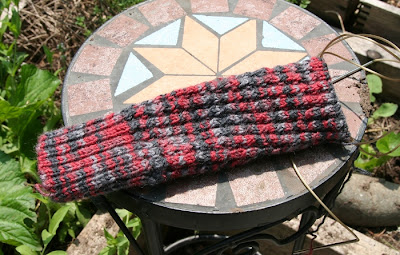 I've had this yarn for quite a while, actually. It was from a member of my knitting group (back when I went to a knitting group) who was cleaning out her stash. I had rather forgotten I had it. I really like Regia yarn and the colorway, now that I've started knitting, looks more appealing than it does on the skein. I like the combination of grays and brick red. Or is it a dark orange? Either way it's pretty and the colors don't pool the way some yarns do. The effect is rather camouflage-like now that I look at it.

I'm using a simple pattern from Sensational Knitted Socks, from the 4-stitch repeat section. It's called Openwork Rib and it's simple enough to remember so I can knit on the bus but still has a bit of visual interest. I'm dying to do another pair from Cookie A's Sock Innovation, or even one of the more complicated ones from Sensational Knitted Socks, but I'm stuck on this idea that sock knitting is for the bus and I can't do anything that involves frequently consulting a pattern because I'll get motion sickness.

Of course there's no law against knitting more than one pair of socks at a time so I could easily start another pair to work on at home, but I'm determined to finish a project before starting another new one. It certainly won't be the oft-neglected Fountain Pen Shawl. And I've temporarily put down the Humboldt Raglan after starting a sleeve and being struck with a sudden fear that I won't have enough yarn to finish the sweater. So it will have to be the Cozy V Neck Sweater, which is actually trucking along pretty well. Today I plan to bind off the body. Then it's just the sleeves and the neckline and it will be done.
Posted by 3goodrats at 12:38 PM