Pushing the Limits by Katie McGarry (2012) 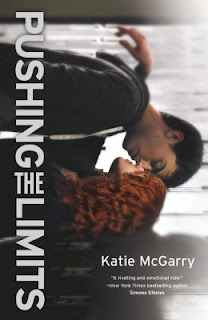 Echo Emerson doesn't remember the night her life changed. She wears long sleeves and gloves to hide the scars on her arms and can't sleep through the night, but her memories of what happened between her and her mother are unreachable. Noah Hutchins lost both his parents in a fire and lives in foster care, separated from his younger brothers. He'll do anything to get them back. Part of his fight for custody means becoming a more responsible person and better student. His counselor sets him up with a tutor. Her name is Echo. The pair are drawn powerfully to one another. But can they get past their problems and actually be good for each other?

I'm not going to lie: this is like reading a self-published book, despite being issued by Harlequin Teen. The writing is fairly terrible, clunky and awkward. McGarry tries really hard with her metaphors, and it shows. "I waited for my pulse to stop beating my veins like a gang initiation..." What does that even mean? In one scene she becomes upset and ill and runs to the bathroom. "The mirror revealed a nightmare." Being sweaty and shaking is a nightmare to someone whose mother once tried to kill her? The gross exaggerations are pretty hard to swallow. As is the overuse of "siren" and "nymph" which Noah uses to describe Echo, words which seem hardly to apply to her at all. I cringed a lot while reading this book.

BUT. I really liked Echo and Noah a lot, and their story was a compelling one. Both characters were believably troubled and it was easy to see why they were attracted to each other. The kids in this book (including Noah's foster siblings, Isaiah and Beth) are real like none I've met in a young adult book before. Usually "bad kids" have been through something traumatic and are misunderstood, but at their worst are a bit sullen and uncooperative. These kids on the other hand swear, talk really crudely, smoke pot, have casual sex with people they never call again. It's fantastic. Typically if a kid is using drugs in a YA book it's because that's the focus of the book. Beth was stoned in most of her scenes, but it's beside the point, just a part of her character. (And she's fascinating, so I was happy to find out that the recently-released sequel is about her.)

Despite the amateur writing, the book's redeeming qualities outweigh its faults enough for me to give it a strong 3-star rating. The swearing and other strong language might be too much for some readers, but to me it made the characters all the more genuine. Adding another layer of depth, there's a playlist in the back of the book which I've been listening to as I type this. Bonus! If you're easily bothered by awkward writing you might struggle with Pushing the Limits, but if you can overlook that for a good story with strong troubled characters, I recommend picking this up.
Posted by 3goodrats at 10:45 AM