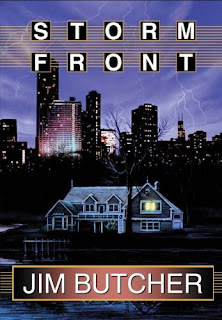 In this first volume of the Dresden Files, we meet professional wizard Harry Dresden. He's sort of a magical private investigator, hired by private clients but also a consultant with local police. In Storm Front the police asked him to look at a crime scene with some very suspicious elements. It's a double-murder in which the victims' hearts seem to have exploded from their chests in a way that medicine cannot explain. But Harry can, and soon he is in grave danger from the same perpetrators.

Urban fantasy isn't a genre I usually gravitate towards, but I was curious about this series because of it's popularity. When I saw that it was narrated by James Marsters, who many of us know from his role as Spike on Buffy the Vampire Slayer, I was even more intrigued. Disappointingly, he didn't speak in a British accent. Nonetheless I thought his performance was excellent. Some reviewers disliked the editing on the audiobook, because it caught a lot of noises that are usually removed, like sighing and swallowing and whatnot. But to me, it just felt like Marsters was in the room with me, personally telling me this story. And I really like him, so that's an enticing thought. I liked how he read Harry Dresden, capturing his feelings from his dry humor to exhaustion and fear. I don't think I would have liked the book as much had I just read it.

The story was well-crafted enough, and I liked it about how I like Janet Evanovich's crime series. Just fun stories that entertain me on a commute, but that I don't really think about after they have ended. But that's just my personal taste - I liked the story and liked Harry Dresden as a character, it's just not really the sort of book I'm into. If you like urban fantasy with crime and mystery elements though, I recommend trying it out.
Posted by 3goodrats at 1:03 PM