The Hand That First Held Mine

The Hand That First Held Mine by Maggie O'Farrell (2009) 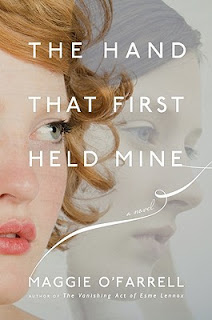 Lexie Sinclair wants nothing more than to escape her parents' home in the English countryside. When she meets a man from London named Innes Kent, she's spurred into finally taking action. Moving to the city, Lexie's life changes...and then changes again.

A few decades later, Elina has just had a baby and she feels everything slipping away from her. She doesn't remember the birth, or her near-death, or what she was just doing a few moments ago. But just as she begins to gain a foothold again, it's her husband Ted who begins to drift away, being tugged by new memories of his past.

There is a relationship between these two couples, one best uncovered gradually as the novel progresses so I won't say more. They are very different stories too. We know from very early on that Lexie is doomed. Despite her determination to live her life the way she chooses, a shadow hangs over her from the beginning. On the other hand, Ted and Elina's life together feels a little more hopeful, though aspects of it are so uncertain.

O'Farrell describes locations in Lexie's story as they exist in the later timeline, ever urging the two stories to converge. I loved the way the story slowly unfolded, drawing the characters' lives toward their eventual intersection. It was beautiful and well-crafted and I came to care a great deal for the characters.

Ted and Elina's story is written with a hazy, dreamlike quality which perfectly captures the mood of memory loss and feelings of being unhinged. In fact, the book is chock full of gorgeous writing, with strong visual imagery. One of my favorite scenes comes near the end and describes a cafe closed up for the night, hinting at the busyness that has now ended. "As if sensing the night-time calm, the refrigerator obligingly shudders into silence." And: "A sack of coffee beans slumps, exhausted, against the counter."

Another moment she captures elegantly is when Ted considers his newborn son: "Ted cannot imagine, cannot comprehend what it is like to see the world for the first time. To have never seen a wall, a washing-line, a tree. He is momentarily filled with a kind of pity for his son. What a task lies ahead of him: to learn literally everything." The novel is full of similarly delightful descriptions, memories, or observations. If this wasn't a library book, I would have dog-eared it into literary origami.

Reading this reminded me why I so enjoyed The Vanishing Act of Esme Lennox. I'm very much looking forward to O'Farrell's brand new book, Instructions for a Heat Wave, which I'd like to think I'll read soon, but I know myself too well to make any such declarations. Still, it makes me feel good that something I'm sure is wonderful will be waiting for me when I'm ready.
Posted by 3goodrats at 6:46 PM