I Know Why the Caged Bird Sings

I Know Why the Caged Bird Sings by Maya Angelou (1970) 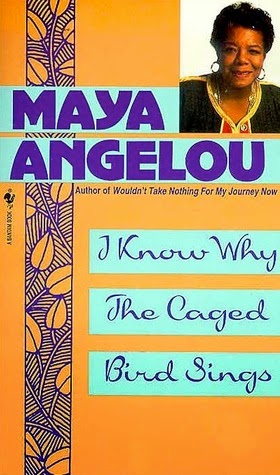 It's probably been close to twenty years since I first read Maya Angelou's memoir about growing up in the South in the 1930s, so I was happy to revisit her story. I imagine a lot of people have read this book recently since Angelou's death a few months ago, and it inspired a couple of people to recommend it for my library's next community read, which is why I've just read it now.

As a child, Angelou's parents divorced and sent her, along with her brother, off to live with their grandmother in Stamps, Arkansas. The kids move around a few times during their childhoods, to St. Louis, back to Stamps, and to California. Angelou recounts what it was like to be a young black girl in that time period, and how she grew to be a confident young woman in spite of it.

It was the Depression, but when you're poor and marginalized already, it's barely noticeable. The most traumatic incident of her childhood was being sexually assaulted by an adult she trusted. But, I think even more oppressive were the million tiny little ways she was slighted because of her skin color. The incident that stands out to me the most was the time that she had a couple of cavities that got pretty out of control and she was in a tremendous amount of pain. The local dentist only treated white people, but Maya's grandmother went to him anyway, claiming he owed her a favor. Still, they were turned away. By now Maya had been in pain for days, but it had to be prolonged even more while they boarded a Greyhound for a trip to a dentist who would treat her. And they just did it. They didn't raise a ruckus or anything because it wouldn't have gotten them anywhere, and honestly, who has the energy to fight back at every single indignity when they come so frequently?

Maya Angelou's experiences are not something I will ever understand fully. As a white American, how could I? But I can definitely tell you that I would not want to be treated the way she and her family and friends were treated. Which of course is why it's so important to read about experiences different from our own. There are so many little discriminations that take place every day and may not be obvious to someone not experiencing it (and I think most women can understand this to a certain limited extent) so reading this was a great reminder.

Of course it took place many decades ago, but as current events prove, we still have far to go as a society to achieve equality for everyone. If you're interested in the experience of African-Americans in U.S. history, or just want a good coming-of-age story, you won't go wrong with this classic.
Posted by 3goodrats at 11:56 AM