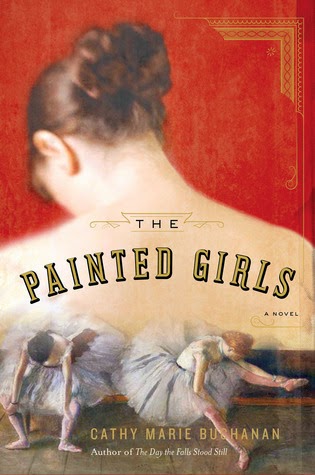 Taking inspiration from the famous Degas statue The Little Fourteen-Year-Old Dancer, Cathy Marie Buchanan tells a fictional story of the real van Goethem sisters, weaving it in with a notorious murder trial of that same period. Antoinette, Marie, and Charlotte have lost their father, and their mother is a laundress who spends most of her meager wages on absinthe. Antoinette has danced at the Paris Opera for a while, and recently found work as an extra in an Emile Zola play. Their mother decides to enroll Marie and Charlotte in the dance school as well, to earn a bit more money. Marie finds success right away and has soon been hired as a model by Edgar Degas. But the family's fortunes do not turn so easily, and as one star appears to be rising, Antoinette turns her attention away from her work and devotes herself to a boy who is soon arrested for murder.

There is something decadently Parisian about the very idea of impoverished young girls earning money through ballet. Granted, it's not much money, but usually the meager wages of the poor are from dirty jobs, like their mother's job at the laundry. Of course, there is definite unpleasantness involved in dancing, when Marie is elevated to the second quadrille and has to quit her second job at the bakery. How will she pay for her dancing supplies and extra meat now? The other girls have abonnes, older men who will shower them with gifts and money, but of course there is a price. It's enough to drive a girl to drink, which is exactly what happens to Marie.

It was difficult to watch Antoinette fall under the spell of Emile Abadie. It's an old story, though - he wooed her and made many promises, but then he was cruel, especially in front of his friends. Antoinette, as many young women before and since, ignored these cruelties and kept believing that he was just in love with her as she was with him. When he was arrested for murder, she maintained his innocence and sacrificed her job to visit him at the prison.

I was completely engrossed from this story from the very beginning. Refreshingly linear, it starts at the beginning and ends at the end, which seems a strange thing to comment on, but it's also very rare. In many cases, it works well to go back and forth in time, or rely heavily on flashbacks, but it's so overused. The only part of Buchanan's writing I found a bit odd was her expression of possessives. It was usually "the nose of Charlotte" rather than "Charlotte's nose" and I'm not sure why she chose this phrasing. It sounded very formal. Otherwise, I found the writing very descriptive and engaging. I just wanted to sit and read all day every day.
Posted by 3goodrats at 7:12 PM