The Wordy Shipmates by Sarah Vowell (2008) 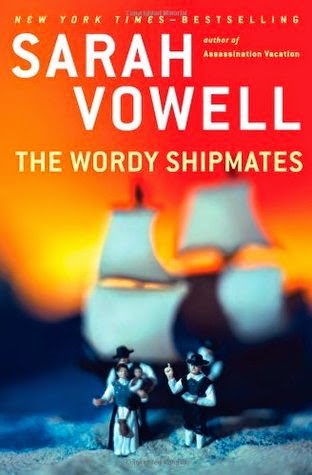 For those of us weak in matters of US history, mention of the Puritans conjures up a mix of images consisting of elementary school plays about Thanksgiving and scenes from The Crucible. Sarah Vowell is here to set us all straight about the early days of our nation and the people who shaped it, in an accessible style laced with wry humor.

The Wordy Shipmates is not so much a story as a really long essay, and I'll admit I struggled a bit with the format. There are no chapters (though there are breaks in the text), and I felt a bit unmoored by lack of clear organization. I like my nonfiction to be subdivided and ordered in a way that's easy for me to see where I've started and where I'm going. Here, it felt a bit like I was just drifting with the tide.

Still, for a book about Puritan thought and 17th century religious rifts, it was remarkably painless. Vowell's writing style is largely the reason why. In teaching about the political and religious views of John Winthrop, Roger Williams, Anne Hutchinson, and other important figures in early America she manages to invoke comparisons with the likes of Fonzie from Happy Days and Samantha from Bewitched. This is a language I can understand. Her tongue-in-cheek commentary on current society also hits home:

"Check out those barbarian idiots with their cockamamie farce of a legal system, locking people up for fishy reasons and putting their criminals to death. Good thing Americans put an end to all that nonsense long ago."

Vowell restricts herself to a pretty short period - between 1620 and 1692 - the period of the settlement of Massachusetts and Rhode Island. It's not an era with which I was familiar, and not one of extreme drama, like the Salem witch trials. But it encompasses some important discussions and disagreements that shaped the founding of America, and the philosophical rifts between many of the English settlers. Because it's so specific, it's also a manageable 250 pages.

Although I may not rush out to read another book by Sarah Vowell, I'll definitely keep them in mind. A couple of her others are more interesting to me subject-wise, such as Unfamiliar Fishes, and if I decide that I want to finally sit down and learn about the US annexation of Hawaii, Guam, and Puerto Rico, it would be most enjoyable with her brand of humor. My interest in history is not enough to get me through a dense, dry, nutritious book, but I can learn from one with a conversational tone and some humor, and do so enjoyably.
Posted by 3goodrats at 10:59 AM