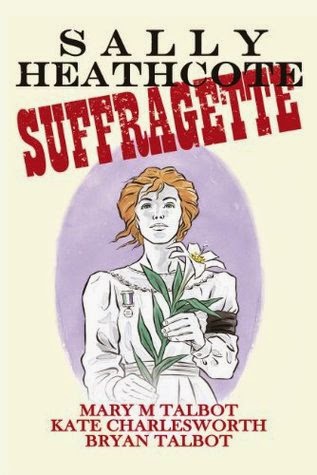 When I heard about this graphic work from Tiny Library, I was very excited because it brought together two things I love: feminism and Bryan Talbot. Talbot is the author The Tale of One Bad Rat, a graphic novel which I love and which partly inspired the titles of my blog. He also wrote an amazing, crazy graphic novel called Alice in Sunderland which is about Lewis Carroll and the young girl who may have been the inspiration for Alice and lots of other weird stuff which may or may not be based in reality. It made my head spin, but in a good way.

Those two books are both very different from each other and Sally Heathcote: Suffragette isn't like either of them. Sally is a maid who works for a suffragette and ends up being involved in the movement herself. I didn't realize when I started reading that Sally was a fictional character and I'm not sure how I feel about inserting a character into a story that is otherwise real. Ultimately, though, it was an effective way to tell the story and all the important parts are true.

I should mention that this takes place in the UK, so although I know a bit about the American suffragist movement, most of this was new to me. I knew about Emily Davison, the activist who threw herself under the king's horse in 1913, because I saw this video, but that was the extent of my knowledge about the British suffragette movement. (Unless you count Mrs. Banks singing "Sister Suffragette" in Mary Poppins, but that's hardly educational.) The movement really was complicated and unglamorous, with its imprisonment and hunger strikes and forced feeding (which sounded awful!) and activists disagreeing about the use of targeted violence.

It was more informative than pleasurable - though I really did appreciate some of the art - and in that way was quite different from what I expected. But if you want to learn more about the women's movement in Britain, Sally Heathcote: Suffragette surely beats reading a dry history book.
Posted by 3goodrats at 9:05 AM