Men Explain Things to Me

Men Explain Things to Me by Rebecca Solnit (2014) 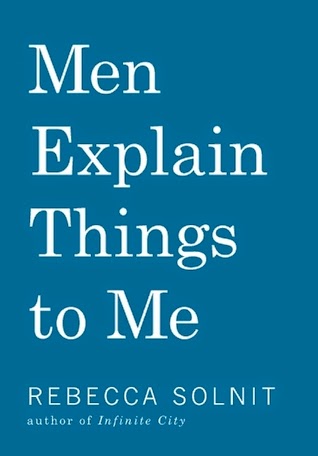 One day I was killing time in a bookstore when I came across - and could not resist opening - a book entitled Men Explain Things to Me. The title essay describes, in hilarious detail, the author's encounter at a party with a smug man who doesn't want to believe she has written a well-respected book on a serious topic. He asks, "And have you heard about the very important Muybridge book that came out this year?" As if there were two books on the very same niche topic published at almost the same time.

And so begins Solnit's short book of essays about women, gender, power, and communication. I later got a library copy to read in its entirety. Solnit writes about domestic abuse, sexual assault - and specifically about the IMF head who raped a hotel maid - marriage equality, the disappearance of women in (and from) history, Virginia Woolf, and the trajectory of the women's movement. A lot is covered, so I'm just going to relate a few bits that stood out to me.

In "The Longest War" she writes about rape and abuse, and includes some pretty eye-opening statistics. One in five women will be raped in her lifetime, which I knew already, but I didn't know that for Native Americans that number is one in three. Another point she makes about rape is that the emphasis is always on how women can protect themselves. Obviously this is important and the only part of it that we, as individuals can control, but what about focusing some attention on teaching men not to rape? She urges us to consider these not as separate crimes existing in a vacuum, but part of an overall huge problem. When she lays out all of these statistics, it really does seem like an epidemic that should be earning far more of our attention. Another infuriating fact? In 31 states, rapists who impregnate their victims have parental rights. Let that sink in for a minute.

When analyzing violent crimes in general, we talk a lot about things like race and guns and mental illness, but ignore gender. The fact is that almost all violent crime is committed by men. Of the 62 mass shootings in the last thirty years, only one was by a woman. One statistic that stood out to me was this: "Women worldwide ages 15 through 44 are more likely to die or be maimed because of male violence than because of cancer, malaria, war and traffic accidents combined."

Another excellent essay is called "In Praise of the Threat" and gracefully articulates what I've been trying to say for years. Opponents of same-sex marriage frequently decry it as a threat to traditional marriage, and Solnit asks why that's a bad thing. Traditionally, marriage has meant the subjugation of women and loss of their rights, so why would we want to preserve that? She feels that "marriage equality" is an apt phrase as it describes not just same-sex marriage, but equality in all marriages, something she says has been increasingly brought about by the legitimization of marriages between people of the same genders.

Although I got a bit bogged down in the Virginia Woolf essay, in general I found this collection eye-opening and it really got my blood boiling in the very best way. (I do enjoy a good feminist rant! Just ask my coworker Jenny.) The only complaint I had while reading is that Solnit presented quite a few statistics and facts without citations. It turns out that in the acknowledgement she says the citations are available in the online versions of the essays. She didn't include them here because it tends to interrupt the flow of writing, which is understandable. But I would have appreciated that note at the beginning of the book, not the end.

I probably will check some of the citations online, not because I don't believe her but because I want to read more about these issues. For instance, she mentions a huge backlog of untested rape kits and I'm very curious, and somewhat horrified, about why that has happened.

There aren't enough books about women in society that are written in such an accessible, and even humorous, way. I'd love to get my hands on more books like this. I'm considering trying Bad Feminist by Roxane Gay, another recent one. Other books I've read in this vein in the last few years include Bossypants, Lean In, and How To Be a Woman. Do you have any recommendations for non-scholarly writings on feminist topics? Post them in the comments!
Posted by 3goodrats at 9:49 AM

I'm so glad you liked this book! (Well, "liked," "were enraged by," you know.) It's one of the best - and most concise - feminist texts I've read recently. I'd definitely recommend Bad Feminist as well, and here are some others.

Ooh, I didn't know about the Adichie essay - I will look for that. Some of the others look great too. Thanks!