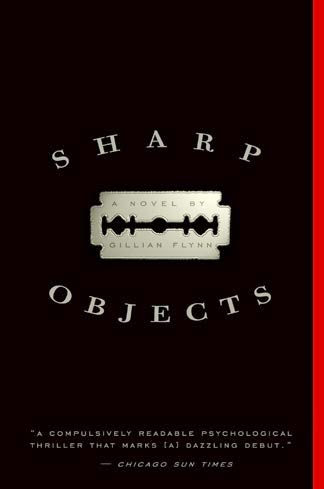 When a pre-teen girl is murdered in her hometown of Wind Gap, Missouri, journalist Camille Preaker heads out from Chicago to investigate. A similar murder occurred the previous year, and though the town is reluctant to receive the sort of notoriety serial murders will bring, Camille is determined to get her story. But returning to Wind Gap dredges up ghosts in her own past, particularly that of her sister Marion who died at around the same age as these girls.

That's enough to put anyone on an emotional roller-coaster, but Camille is also battling her own self-destructive impulses. Ever since her sister died so many years ago, she has cut words into her body, now a veritable tapestry of scars. Since her stay in a psychiatric hospital, Camille has stopped cutting but it's a tenuous recovery, and she seems to have replaced that behavior with heavy drinking. It doesn't help that during her investigation she has to stay with her mother, step-father, and 13-year-old younger half-sister Amma, who she barely knows. All of this is a recipe for a story rife with dysfunction and dark, dark secrets.

Gillian Flynn's earlier novels, Sharp Objects and Dark Places, are more gritty than the more well-known Gone Girl. Everything is unpleasant. Characters are not likable, houses are rundown and dirty, the weather is oppressive, the town's main business is an industrial pig farm. Illness is described in nauseating detail, and when Camille is injured her mother pokes at the wound. Everything bad is just aggravated and made worse until everyone feels horrible, both physically and emotionally. Camille, much like Libby from Dark Places, is a troubled young woman with a dark past who is emotionally distant and has few, if any, friends. Camille is more functional than Libby since she actually has a career, but it seems she's barely holding onto it. It's been a while since I read Gone Girl so it's a bit difficult to compare them but although they are all pretty screwed up, I think these older novels have a more pervasive darkness.

Because I so enjoyed the audiobook of Dark Places, I listened to the audio for this one as well. I would have done so much earlier had it also been narrated by Rebecca Lowman, who I sincerely believe should be hired to read all the books. All of them. Ann Marie Lee isn't bad, but I was a bit put off at the very beginning when she mispronounced both "Gillian" and "Pulitzer." Some of her voices were a little overdone, such as younger sister Amma's high-pitched, wheedling tone that set her up as more of a bad character than necessary right at the start. Otherwise it was a good listening experience and I wish Flynn had more material, because something about her books works very well on audio for me.

I have a lot to say about this novel and its characters, but I don't want to recount too much for those of you who haven't read it. Flynn's books really probably aren't for everyone, but I just think they're all brilliant and I somehow enjoy wallowing in the bleakness. Nobody writes quite like she does.
Posted by 3goodrats at 9:00 AM

I've been meaning to pick up a copy of this book. Thanks for reviewing it. I'll try listening to it!