In Darkness by Nick Lake (2012), narrated by Benjamin L. Darcie 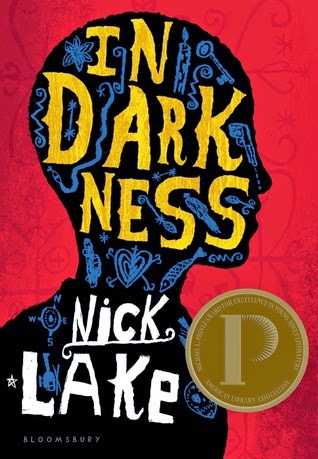 Shorty was in a hospital in Haiti when the earthquake hit, and now he is trapped in darkness where nobody can find him. He thinks about his life - his father, who was murdered, and his twin sister, who was taken the same day. He thinks about how everything changed after that and how he became a gangster and a killer.

In the late 1700s a slave named Toussaint L'Ouverture leads a rebellion against the French which ultimately results in the freedom of the slaves and the founding of the Republic of Haiti. His story is also one of struggle, danger, and tragedy. There is a connection between Shorty and Toussaint which brings both stories together in this deservedly award-winning novel.

There are so many elements that make this story stand out. How many works of fiction are even set in Haiti, much less ones intended for teenagers? I'd venture to guess very few. Beyond the uniqueness of the subject, though, is a strong story that is also driven by believable characters brought to life in all their personal struggles and imperfections. I also fascinated by the descriptions of vodou ceremonies and attempts to create zombis, which were different from the zombies of our popular culture. And I think Shorty is now one of my favorite characters. His voice is sincere, earnest, sometimes angry, but always compelling. He is trapped and alone with his thoughts, so he tries to be completely honest, but his story also has a desperate feel because he's trying to tell the whole thing before he dies.

Toussaint's character was very different - a middle-aged slave being lured into leading a revolt - but not without similarities. Both characters are desperate, both characters are in a dangerous Haiti that is changing, and both are caught up in a life that feels beyond their control, Shorty as a gangster and Toussaint as leader of a revolution. The two characters kind of channel each other, their stories woven together in a way that is difficult to buy as a concept, but works very well and doesn't feel forced.

This is a book that would have probably worked better for me in print than audio, particularly the historic scenes, but I do have a hard copy available that I read bits of in spots where my mind had wandered from the audio. That being said, Darcie's Haitian-accented narration was fantastic. I could listen to that guy read to me all the time. The story contains a lot of unfamiliar French or Creole words, but they are usually explained or just obvious from the context. In the audio, this only added to the feeling of authenticity.

Although this book has been on my list to read for quite a while, I kept passing it by until impulsively downloading the audiobook one day when I was feeling extremely indecisive about what to listen to. It was a great surprise and I'm so glad I got to finally experience this story, and accidentally learn about some Haitian history in the process. In Darkness stands out as one of the most unique books for teens I've come across, and I know I'll be recommending it a lot and I'll be thinking about Shorty and his story for a long time.
Posted by 3goodrats at 9:53 AM

This has been on my list as well, and I don't think I even realized it was YA. Sounds quite good.