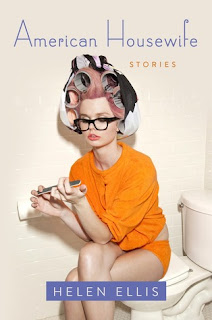 In this slim volume of short stories, domesticity comes a bit unglued. In "The Wainscoting War" a new tenant engages her neighbor in a battle over redecorating their shared hallway, told through a series of emails. "Hello! Welcome to Book Club" is an orientation to a new book club member, describing the many rules of book club and ultimately disclosing the dark purpose for her invitation. In "The Fitter" an insecure wife of a talented bra fitter tries to recover from an illness while quelling rumors about her marriage. The final story in the collection is "My Novel Is Brought To You By Tampax," in which an author supposed to be working on a novel spends most of her time drumming up publicity on social media, resulting in a harsh, creepy crackdown from her sponsor.

Several of the stories are written in second person, a few of which are basically lists of directives. My favorite of these is "How To Be a Grown-Ass Lady" which instructs the reader on everything from shopping to drinking responsibly. These instructional pieces are among the shorter of the collection, along with "Southern Lady Code" which is a list of things Southern ladies say along with translations of what they actually mean. These pieces are sharp and funny, but less memorable than the more traditionally-structured stories.

Of the longer, more fleshed-out stories, I quite liked "Dumpster Diving With the Stars," in which an author tries to get back in her game, publicity-wise anyhow, by appearing on a reality show. There she befriends a former Playboy playmate named Mitzy, as well as a colorful cast of other contestants who contribute to the story's wackiness. The idea of the show is to find or buy antiques that are worth much more than you paid; whoever scores the biggest difference is the winner. The author, however, is trying to drum up interest in her writing although she isn't producing anything new, partly out of fear of copying her best friend, a more-successful writer.

I also really enjoyed "My Novel Is Brought To You By Tampax," which is coincidentally also about a writer who isn't writing. She is, however, creating: she knows who her characters are and has created Twitter accounts for them, garnering thousands of followers. Her account manager at Tampax, though, is not satisfied and goes to more and more desperate means to keep tabs on the wayward writer and make sure she begins producing.

These stories are biting, funny, dark, and sometimes over-the-top. In some cases I thought they were a bit too over-the-top, such as in "The Wainscoting War," but even so I found something to enjoy in all of them. There are twelve stories in all, and the entire collection only fills 100 pages, so it is well-worth spending a little time with.

I haven't read anything quite like this collection. The closest books I can think to compare it to are Where'd You Go Bernadette by Maria Semple and Let's Pretend This Never Happened by Jenny Lawson. It's as different from those two as they are from each other, but I think they may all appeal to the same kind of readers. I'm looking forward to hearing how this book is received once it's published in a few months.

American Housewife will be published in January 2016. I received my copy courtesy of the publisher via Edelweiss. I was not compensated for this review.
Posted by 3goodrats at 9:41 PM