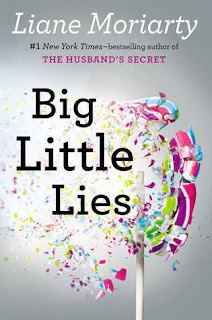 Nobody expected the Parents' Trivia Night at Pirriwee Public School to end in tragedy. But it's true that things had become increasingly tense among many of the parents. It all began when Renata accused Jane's son Ziggy of bullying her daughter Amabella, and started up a petition to have him expelled from kindergarten. Jane had just moved to the area and her new friends Madeleine and Celeste were supportive, but also distracted by their own problems. Madeleine's daughter is becoming more and more aligned with her stepmother, which is made worse by Madeline's lingering bitterness towards her ex-husband, who unfortunately chose to live in the same small town. Celeste's life is picture-perfect, with her successful husband and adorable twin boys, but underneath it all is a dark secret she may not be willing to hide for much longer.

Told in third person but focused on Jane, Madeleine and Celeste, the novel opens on the vague mayhem of Trivia Night and then goes back six months to the kindergarten orientation. Interspersed in the narrative are snippets of interviews regarding the tragic events of Trivia Night. We aren't told any specifics, including the identity of the victim, but we get many conflicting views on the people involved by various bystanders.

There's a review of this book on Goodreads that says only "Probably the funniest book about murder and domestic abuse I'll ever read," which sums it up very well. Almost all of the issues and problems are pretty serious, but reading about it was so much fun.

Primarily this is because of the excellent, realistic characters. My favorite was Madeline, who characterizes her family role as "the comically crazy mother." She is super dramatic and silly and very well-intentioned. Jane has never gotten over the circumstances of her pregnancy, which came about from a one night stand that was quite traumatic. She changed after that and kept herself in a kind of suspended animation. When something nice was happening she would think to herself, "I wish I was here." Celeste is effortlessly beautiful and eternally distracted, but none of her friends have any idea what her life is really life. Her marriage is outwardly really good, and even at home she and her husband Perry usually get along. But sometimes she will say something he doesn't like, maybe something that makes him feel stupid or humiliated, and Celeste has to pay the price.

I really like the way a number of issues were handled, but domestic violence was the big one. Celeste was a lawyer before she stopped working to raise her sons, so she is a very educated and strong woman, one who knows the law. But even she can fall prey to abuse and continue to justify staying in the relationship. Early in the book she described it as being mutual, like a dangerous game that she and her husband played together. It was very interesting to see the way that her thoughts about her husband's behavior evolved as the novel progressed.

The way that we portray our lives on social media was also a theme throughout the novel. I know this issue is nothing new, especially to anyone with a Facebook account, but it was so well illustrated through the lives of these characters. Perry had a very active presence on Facebook, and was constantly reinforcing to himself and the world that his family life was perfect. But Jane, too, spent some time early in the book thinking about various things she could post on Facebook and the sorts of comments people would probably make if she did so, and what conclusions about her life they would draw.

This was a book that I kept wanting to pick up every chance I got, though my busy week didn't allow me to suck it in as quickly as I wanted to. It's fairly long but didn't feel that way since it was so fast-paced. I spent a lot of the book worried about these characters who had totally started to feel like friends, because I knew that someone was going to die and really had no idea who it would be. It didn't feel like a suspense novel though since it was so fun, and I really enjoyed it from beginning to end. This was a pick for my book group (we also read another of her novels, The Husband's Secret) and there was a whole lot to discuss. If you like light funny books about serious issues, this might be for you.
Posted by 3goodrats at 10:28 AM