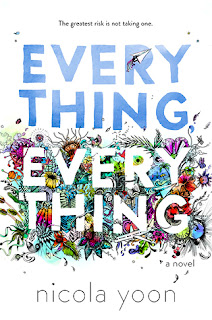 Madeline has never gone outside her house, and she almost never has visitors. She has a rare disease called SCID that makes her vulnerable to even the most harmless germs. (Remember the boy in the bubble? That's her.) Her mother happens to be a doctor, which is totally convenient, and the only other person she has regular contact with is her nurse Carla. Until a new family moves into the house next door, and one of them is a teenage boy. Madeline and Oliver communicate through their bedroom windows and then online, but soon it's not enough and now Madeline wants more than anything to be just a regular girl who can go outside.

I couldn't quite figure out why Madeline hadn't ever felt too confined before. She had tv and the internet, so it's not like she had no idea what was out there. Another thing I didn't understand was why she dressed only in jeans and white tops. I get that she has nobody to look good for, but you'd think she would want to make her life interesting in what ever way she could. Then again, I don't know what it would be like to grow up like she did. I guess I should have a better idea of it from this novel, but some things just weren't totally fleshed out.

I won't say too much about what happens with her hot neighbor, Olly, but I really liked him. His family was SO dysfunctional, and while I found his father to be rather a two-dimensional villain, Olly was really great. Madeline's family is also not completely functional, and without giving things away I'll just note that she lives alone with her mother and the missing family members are important. She is super close to her mother and while I think her mother tries to make Madeline's life fun with their special Friday night dinners and board games and whatnot, she is also a tad bit too controlling. (This may be an understatement.)

An important theme in this novel is being as safe as possible versus living your life. Madeline starts thinking about how much of life she is missing and wondering if it's worth it. Maybe certain things that could potentially be dangerous are totally worth the risk. This all made me think about the ways that we try to be as safe as possible and what we give up for it. (I'm talking about the U.S. here, as other countries aren't quite so insane in this particular way.) Sometimes it's on a large scale like forgoing some civil liberties in the interest of keeping everyone safe from terrorism; sometimes it's smaller, like not letting your kid walk to the park alone because of the tiny chance they might be abducted (even though crime has gone way down in the last few decades.) This would be a great book for discussion.

This is a super quick read! The text is really broken up, some pages consisting of just a few sentences. It includes illustrations (drawn by the author's husband), and some of the conversations are in Google chat or texts (illustrated with a phone screen). Also, the cover is really gorgeous. I couldn't stop with this book once I started, and totally flew through it in just a day or two. It's pretty unique so I highly recommend it to anyone who reads teen fiction.
Posted by 3goodrats at 5:03 PM