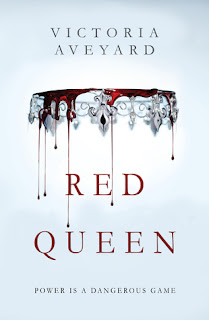 In Mare Barrow's world you are either a Silver or a Red, depending on the color of your blood. Silvers are the elite, gifted with not only power over Reds, but with actual superpowers. Reds are commoners and toil at harsh jobs at which they are underpaid, and if they don't have apprenticeships by the time they are 18 they are conscripted into the military. Mare is in such a position just weeks before her birthday until a chance meeting with a stranger lands her a position at the Palace. Here she accidentally discovers her own impossible superpower in the most public of ways, and the royal family take her in and make up a cover story, but it's inevitable that the truth will come out. Making things even more dangerous, Mare has aligned herself with a rebel group called the Scarlet Guard, which seeks to end domination by the very Silvers she is now living among.

I went into this with very high hopes, because I heard such positive glowing reviews from others. And it was good, but I didn't love it as much as everyone else apparently does.

I liked that the plot revolves around realistic power politics. Despite the supernatural powers, it's really about one group being in power and another group's secret force who wants to overthrow them. So many lies and betrayals!

Which brings me to the characters. You don't know who to trust, just as Mare doesn't know who to trust. She has to just decide when to risk it and when to hold her tongue. These are complications situations and I just don't know what I'd do in her position. Sometimes I thought she and the Scarlet Guard were being too reckless. Winning power for the underclass is a worthy cause, but if you screw up, everyone gets punished.

Still, some things didn't make sense to me. When the royal family tells Mare she is to live with them, Mare makes demands to which the family immediately acquiesces, though she's in no position to bargain. Late in the book there were some big decisions to be made that would affect the future of the kingdom. Actions were taken based on one person presumably loving another enough to betray everything they believed in, and it really didn't make sense in the context. I may have actually rolled my eyes at this point (though ultimately I liked how it was all resolved.)

I'm not gonna lie: I liked the last dystopia I read much better. (That was Scorpion Rules by Erin Bow.) This one just somehow wasn't quite fresh and new enough for me. It's got a good, strong female protagonist and lots of high-stakes drama so I can see the appeal and certainly wouldn't caution anyone against picking it up. I enjoyed it well enough while I was reading it, but now that I'm done it's just not sticking with me and I'm ready to move on.
Posted by 3goodrats at 9:23 PM