Daughters Unto Devils by Amy Lukavics (2015) 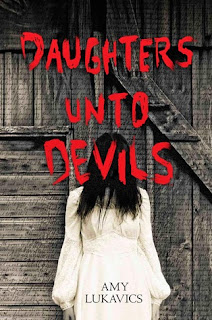 Are you looking for a good Halloween read? Look no further than this debut teen novel that was just released last month. It has been described as Laura Ingalls Wilder's worst nightmare, and I concur. It's deliciously terrifying! And I love that cover. Why are obscured faces so incredibly creepy?

Sixteen-year-old Amanda and her parents and four brothers and sisters need to leave the mountain before winter. Last year they barely made it through, and something bad and unnamed happened to Amanda that she hasn't recovered from. So they pack up and go to the prairie to find an abandoned cabin for their new home. The cabin they find is comfortably large, but needs work. It appears that someone had slaughtered an ox inside, leaving the walls covered in blood. Something is not right on the prairie. But Amanda has no time to think of that, because a much more immediate problem is the baby she is carrying.

I read this in about a day. It is short and simple to read, but full of creepiness and terror that was all distressingly easy to visualize. The descriptions weren't enough to bog you down, but were cinematic in their simplicity. The story is kind of a slow build; you don't know what's wrong, just that something is, and it's steadily approaching. It begins at a moderate pace but intensifies rapidly, making it awfully hard to stop. I mean, you can't just put it down when such danger is lurking. That would be irresponsible.

Amanda is so tortured. She knows she is evil because of this thing that happened last winter and she doesn't want to be evil, but she feels that it's too late and all is lost. All she can do is try to minimize the damage. But her close relationship with one of her sisters has disintegrated, and she can't imagine telling her parents about her pregnancy though she doesn't have much of a choice. One of the most unsettling aspects of this novel is that Amanda is so recognizable as a regular teenage girl, but is stuck in such an out-of-the-ordinary situation.

I love that this book takes place in early America, which is under-represented in fiction in general, but especially in horror. Somehow that time period is even more scary, because things were so dangerous. I read all of the Little House books, and I don't care how much Laura Ingalls Wilder tried to idealize her childhood, things were rough!

Don't let this one pass you by. Here's hoping that Amy Lukavics will write more books like this, and soon!
Posted by 3goodrats at 8:41 PM