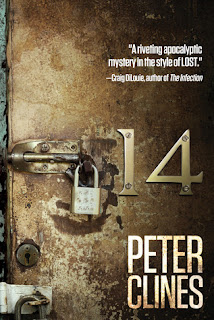 Nate Tucker has a crappy data entry job and shares a house with a few roommates. When they all decide to part ways, he happens on a great deal for an apartment. It's a little too good. He moves in, starts meeting his neighbors, and begins to notice very odd things. Like, green cockroaches with extra legs. A light fixture in his kitchen that turns any bulb into a black light. Mysterious padlocked doors. As he visits the other apartments in the building it just gets weirder and weirder and soon Nate is organizing a group of newfound friends on a quest to investigate their strange building. They find way more than they ever expected.

I heard about this book last year, when it got great reviews and made some "best horror books of the year" lists. I knew it was about a creepy apartment building, but it is so much more than that. Of course I can't tell you what because that would ruin it. But it just got better and better as the residents tried to solve the mystery of their building, and it goes places that I never expected. A quote on the cover compares it to the show Lost, and I can see why. There are lots of little mysteries that don't seem to relate to each other, but you know that somehow they're all part of something larger. It was just riveting.

One of my favorite things about the novel was that I really felt the characters come together and form friendships through the course of their adventure. And they were good characters who I was rooting for (most of them, anyhow.) Of course it was also a great mystery that was quite creepy in parts, with strong elements of science fiction and even steampunk. Everything about it was very compelling and I found it difficult to put down.

Despite the press it got last year, I don't know that this is very widely read. However, I'll certainly be recommending it. It's like a cross between Lost and the best aspects of House of Leaves, but still unusual and original. Really fantastic!

I just want to briefly mention the publisher, Permuted Press (tagline: "Enjoy the apocalypse.") I'd never heard of them before, but had great fun looking at all the covers and titles featured in the back of 14 and on their website. I would have been all over these books when I was a teenager. Some of them look awesome now. Judging totally on how they look though, I'd say that 14 is of a higher caliber than most of the books. But if you like horror, definitely take a look.
Posted by 3goodrats at 6:35 PM