Down the Rabbit Hole

Down the Rabbit Hole: Curious Adventures and Cautionary Tales of a Former Playboy Bunny by Holly Madison (2015), narrated by the author 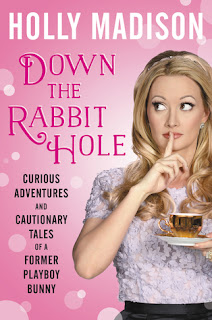 I'm going to destroy any image of being a somewhat literary type of person now. Years ago when I had cable, I used to watch The Girls Next Door. Not regularly, but I probably watched several episodes, which is more than I've watched of any other reality show ever. I can't explain why, but there it is.

In case you don't follow this sort of thing, Holly Madison lived at the Playboy mansion as one of Hugh Hefner's girlfriends for several years, during which she appeared on the reality show that I mentioned above. Down the Rabbit Hole is a memoir primarily focused on her time there. Madison wanted to become a famous actress and went to California to pursue these dreams. While working at Hooters, she began hobnobbing with people who got invites to parties at the Playboy mansion and she began going to the parties regularly. Eventually she got Hugh Hefner's attention and ended up moving in. It wasn't so much that she was attracted to the old man, but she needed a place to live and thought that being affiliated with Playboy could help her career. It ultimately did, but at a pretty steep price. Hefner treated his girlfriends like pets, enforcing strict rules on them and being very controlling and jealous.

Hefner sounds like a pretty troubled old man. He always had several girlfriends who were in their 20s, constantly pressured them to look the way he wanted, and regularly had temper tantrums when they did things he didn't like. Also, he had like 10 dogs who weren't housebroken, and white carpeting everywhere. It was really strange to me that a man who employs a scrapbooking staff couldn't manage to employ some dog trainers. Ew.

What most people probably want to know about is the sex. The official line from "the girlfriends" is that there isn't sex. According to Holly this is (unsurprisingly) a lie. She mentions the dreaded "bedroom routine" but only actually describes it once. Basically, two nights a week Hefner and the girls would go clubbing and afterward they all gathered in his bedroom for what sounded like some pretty unsatisfying, perfunctory sex. This was all rather glossed over. As I said, she only really described it once, though mentioned it a number of times in passing, including one point when she says they stopped going out to clubs and therefore stopped the post-club ritual. Late in her time there, she was apparently not having sex with him at all. But what I wanted to know was: did she miss dating? She lived there from the ages of 21-28 and that is the time when you should be having some real romance and actual sex that you enjoyed. I'm also curious about things like disease and pregnancy. At one point she mentions a rumor about herpes but doesn't actually address whether they got tested for diseases or used protection at all.

Aside from the obvious omissions, I really enjoyed the bulk of the book about living at the mansion, her hopes to score a pictorial in the magazine, and her strange relationship with Hugh Hefner. But a couple of hours before the end of the audiobook she left the mansion, and although things began going much better for her, they went poorly for the book. The story became a hodgepodge of activities and squabbles without any insight. There was a lot of drama between the girls and it got a lot worse as things went on. It was all very petty and catty and I just don't care what Hefner's new girlfriends said about her. Plus she left out much of what happened. For instance, she shares her excitement about the prospect of being on Dancing With the Stars, but when she scores the slot she makes one mention of how she can eat whatever she wants because of all the dancing, and moves right on to "after I was eliminated...." Wait, what? Tell us about being on the show! Just a couple of sentences about whether or not it was fun and what she thought about her dance partner would suffice.

By the end, I still had a lot of questions. For instance, she was at the Playboy mansion for seven years and apparently wasn't allowed to spend a night away. Was she ever able to visit family? What did they think of this? She does briefly recount an episode of the show in which she travels to her home state of Alaska with her family, and also says that she attends her sister's wedding, so obviously she still had a relationship with her family, but she is strangely silent about this aspect of her life.

Madison held back a lot that I wanted to know, but I also realize I'm probably not the audience for this book. It's likely aimed at people who are more interested in her life as a famous person, which is definitely highlighted over her personal life. I wanted more of the personal stuff and her insights about her experiences. Still, I feel like I know her better and honestly I have a decent amount of respect for her. I was pretty turned off near the end when she began addressing what other girls were saying about her and basically saying that she is better than they are (which is possibly true) but then I thought back to something she said at the beginning of the book: "I always thought it would be classy to not kiss and tell...but after a while you just get sick of having other people trying to tell your story for you." I can't deny that.

Each chapter began with a quote from Alice in Wonderland or Through the Looking-Glass, which were quite appropriate to the story actually, but to my dismay she read them in a terrible fake British accent. Otherwise, Madison did a great job as narrator. Despite her image, she's the sort of person who might actually pick up a book, so perhaps she'll consider adding audio book narrator to her career repertoire. At any rate, she has written another one: The Vegas Diaries is set to be published later this year. I might skip it, but I'm not sorry I listened to this one.
Posted by 3goodrats at 7:30 AM