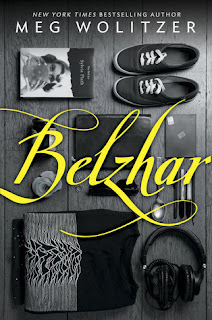 Jam Gallahue found love with Reeve Maxfield, an exchange student from England, but after just 41 days tragedy took him from her. Her parents have sent her to the Wooden Barn in Vermont, a boarding school for emotionally fragile teenagers. Jam is accepted into an exclusive and somewhat mysterious class called Special Topics in English, which she got into despite not applying. In this class the students read only one author all semester, and Jam's class will be focusing on Sylvia Plath. They are also given journals and told to write in them twice a week. Writing in a journal can often help someone work through their problems, but in this case what Jam and her classmates experience is otherworldly.

There are only five students in the class, and each has been through a difficult trauma. Over the course of the semester they develop friendships and share their stories, though some students are more forthcoming than others. The types of traumas the students have experienced vary in their severity, and one whose situation might seen comparatively mild is apologetic about it. Another student, Casey, points out, "But it's the worst thing that's ever happened to you." To me this is one of the most important points of the book, and something that I wish people would remember a bit more. It's easy to dismiss some complaints as "first world problems" or say things like "at least you have such-and-such" but those statements never help. Yes, it's important to keep perspective, but geez, let people feel bad about their problems for a little while, at least. It's ok.

I liked their teacher, Mrs. Quenell, a lot. In many YA novels, adults are non-present, two-dimensional, or villains, and I really appreciate a good story in which a teacher actually makes a difference in her students' lives. At the beginning of the semester she asked the students to look out for each other, and they took those words to heart. They supported each other as they tried to work through the difficulties in their lives and, inevitably, romances blossomed too.

Jam holds her story back as long as possible, and I admit I felt a little conflicted about the reveal. When I read the full backstory about her relationship with Reeve and what happened to him, I felt a bit of a letdown. But I hadn't predicted it, and by the time I finished the book I felt pretty solidly that I liked the whole story, ending included. I'm really looking forward to discussing it with my book group at work. This is a book that needs talking about.

I'm always a sucker for a good boarding school story, even more if it involves trauma of some sort. When I first heard about this book I was very excited because of the Sylvia Plath connection. I love her work so much, starting way back when I first discovered her in high school and read The Bell Jar (which I really want to read again now.) But when I read reviews they mentioned magical realism and I was put off by that. I don't know what I think magical realism is, but whatever it is in my head isn't apparently what it actually is. This is my first Meg Wolitzer book, and the first she has written for teens. I wasn't sure what to expect, but I liked it very much!
Posted by 3goodrats at 7:30 AM