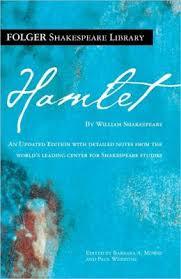 I may have gotten a little too cocky after reading Macbeth, which was pretty short and easier to read than I expected. Hamlet was another matter entirely.

Hamlet is also a tragedy, and begins with some conversations with a ghost which is presumed to be Hamlet's dead father, the king of Denmark. After his death, his brother Claudius married Queen Gertrude within a month. Hamlet learns that Claudius murdered the former king and vows revenge. His erratic behavior makes everyone suspect that he is mad and Claudius tries to have him sent to England, but he makes his way back, and by the end a number of characters die.

The plot isn't especially complicated or hard to follow, but the play is filled with various soliloquies and philosophical conversations that had my head spinning. Deciphering the language was simple enough in Macbeth when it all pertained to matters at hand, but here much of the dialogue is about more abstract topics and was much more difficult to read and understand.

Again, it was fun to read well-known quotes in context: "Get thee to a nunnery," and "Alas, poor Yorick!" Common expressions that originated in this play include "Neither a borrower nor a lender be," and "Something is rotten in the state of Denmark," a favorite phrase of my father-in-law (whose delivery is paraphrased and heavily Boston-accented, but nevertheless recognizable.) Most famous of all is Hamlet's "To be or not to be" soliloquy, which was quite poetic and nice to read.

Because they are so highly recommended, I picked up the Arden edition at first. The introduction was around 150 pages and so scholarly I couldn't read it. The layout of the pages was difficult as well - on each page there was just a small block of text from the play and the rest was notes, and many of the notes weren't really helpful to me because they went way beyond what I needed to understand the text. Arden must be geared more toward academics, so I think I'll stick with the Folger editions.

I've completed the tragedy portion of my Shakespeare reading for the Bardathon Challenge, and am ready to move on to comedies. Now I'm also considering reading some of his sonnets this year since the plays are not as unpleasant or time-consuming as I was anticipating and I could stand to add to my challenge for a more well-rounded experience of Shakespeare.
Posted by 3goodrats at 8:00 AM