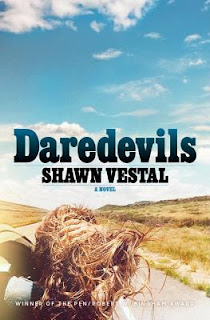 Loretta is a teenager in the mid-1970s and lives in the strict Mormon community of Short Creek, Arizona. When her parents catch her sneaking out at night to be with a boy they quickly marry her off to an older man and she must go live with him and his large family as a sister wife. When her new husband's father dies, they go to his farm in Idaho and Loretta meets Jason, a fan of J.R.R. Tolkien and Evel Knieval, and the two hit it off and eventually band together to make their escape.

Although this story takes place in my least favorite decade, I was drawn to it because of the whole Mormon sister-wife story. I did really enjoy that part of it too. When Loretta went to live with Dean and Ruth and their kids I expected it to all be awful, but it wasn't. She didn't want to be there, of course, but Dean was not at all mean to her, nor was Ruth, and she really liked the kids. It's too easy to make everything about a shitty situation bad and I appreciate that Vestal didn't do that.

The entire book was in third person, but the chapters shifted back and forth between Loretta and Jason. I also liked Jason's chapters early in the book when we're just getting to know him. He is in many ways a pretty typical teenage boy, one who is kind of awkward and doesn't generally get into trouble. He has one good friend, a part-Native American boy named Boyd, and he is also close with his grandfather who has lied to Jason's parents in order to sneak him to see Evel Knievel perform a stunt.

There were short bits between chapters called "Evel Knievel Addresses An Adoring Nation" which were just short monologues by Knievel who refers to himself in the plural and seems to be a total asshole. These were my least favorite parts of the book and they seemed extraneous. I think the point was that Jason sees this guy as a hero but he's actually kind of an ass. He's not the only person in this book who turns out to be disappointing.

I really got into this book for the first 100 pages, which I read in pretty much one sitting. The writing is solid and I was drawn in right away, especially by Loretta's part of the story, but I also enjoyed Jason's chapters. But my interest and momentum waned as the story started to flounder a bit. Although things were still happening, it felt like it wasn't going anywhere very satisfying and there were few surprises. It kind of just kept going until it stopped. It wasn't bad, it just didn't fulfill the promise of the first third of the book somehow.

Nevertheless, it got me another square on Winter Bingo as it's a 2016 debut. I think this is probably my last completed square as nothing I'm planning to read soon qualifies for any of the other spots. Take a look at this, will you? There are FOUR rows where I have 4 out of 5 of the squares. You couldn't even plan this. I should get some sort of a prize for my ability to not get bingos. (Update: I realized later that I had missed one. Check out my final Winter Bingo post for the actual completed card.) 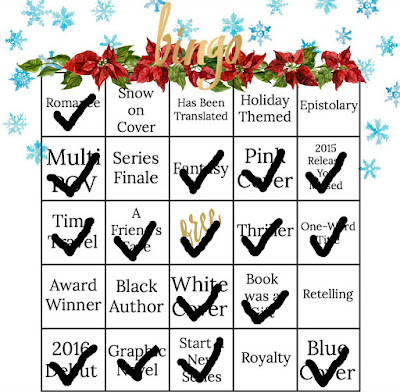 Daredevils will be published on April 12, 2016. I received my copy courtesy of Penguin and was not compensated for this review.
Posted by 3goodrats at 8:00 AM