The Winter Rose by Jennifer Donnelly (2008) 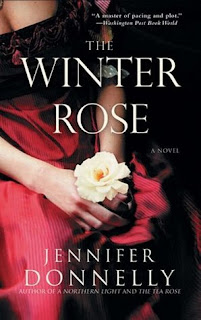 Although The Winter Rose is a sequel to The Tea Rose, I was glad to find that it can stand alone because it's been a few years since I read the first book and I don't remember the details. The main characters, Fiona and Joe, are back again and joined by a new and interesting cast including a lady doctor, India Selwyn Jones. After graduating from medical school she begins work at another doctor's practice until she can afford to pursue her dream of opening a clinic for women and children in London's impoverished East End. But her boss is not sympathetic to the plight of women and India becomes even more impatient to set out on her own. Meanwhile, she's engaged to politician Freddie Lytton, a total asshat who wants India for her huge dowry and plans to make her quit her job because it is so unbecoming for a lady to be a doctor. But when India meets - and falls for - local crime boss Sid Malone, everybody's plans become derailed.

This is a 700-page book just packed with drama, adventure, and romance. My description is just a small bit of the story, which sucked me in from the very beginning. What I remember most about The Tea Rose was just being so immersed in it, and so incredibly invested in the people I got to know over the course of many years (and pages!) It was as though I went through all these harrowing experiences with them. I'm happy to say that the experience was the same with this book. There were times that I was positively stressed out at what was happening, even though I knew that most of it would work out in the end.

It was nice to see Fiona and Joe again, and although they definitely still had a good story, it was India who I was most interested in. Graduating from medical school in 1900 was a big deal for a woman and many people had strong opinions about this. I love a story about a woman ahead of her time, and India's story was very satisfying. She was smart, ambitious, and had a passion for helping the poor. Most of all, she was practical and I just love a protagonist who is that realistic and sensible about things like getting birth control to those who need it. The doctor she worked for, on the other hand, I wanted to smack. For instance, when preparing for a visit with a woman in labor, India asked him for chloroform and he refused. This was his explanation: "Labor pain is Eve's legacy, and to ameliorate it would be against God's will. Birth pains are good for women. They build character and inhibit indecent feeling." And he wasn't even the real villain of the book.

The Victorian era is my favorite historical time period and Donnelly does a great job bringing her many characters to life in this long and complicated story. It was incredibly satisfying! I don't know when I'll finally get around to reading the third and final book in the series, but I am very much looking forward to the experience.
Posted by 3goodrats at 8:00 AM