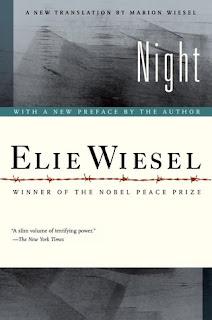 I read this for the first time in high school, and after that I read a ton of Holocaust literature for years until I felt like I had overdosed on it. Since then I have sort of avoided World War II books, with a few noted exceptions. But after Wiesel's death a few months ago, this book was recommended for the Community Read committee and made it to the shortlist.

In case you haven't read it, Wiesel tells the story of his family's capture by the Germans in Hungary and their subsequent journey by train and marching to a couple of different concentration camps. He and his father were moved from place to place, not fed or even given water sometimes, and saw many people killed at the hands of the Nazis. His story is filled with human cruelty, but also some kindness and hope.

It's a very short book, but it's relentlessly brutal. It's made worse because the story ends pretty much the moment Wiesel is liberated. In the beginning he alludes to his mother and sisters being split off to go with the women as the last time he sees her or his littlest sister. But what of his other sisters? He doesn't mention them at all. I know the story is just supposed to be this one experience, but it felt incomplete without this information. I wanted something about the aftermath of this experience, even just a few pages.

His writing style is simple, but with the sort of profound moments that come when one is faced with death at every turn. Only fifteen when he was captured, Wiesel lost his faith in God and humanity pretty quickly. He records a pivotal moment when he remained silent as someone struck his father, recognizing that even the day before he would have fought the attacker. He also noted at one point how he was no longer affected by all the people he saw die every day.

But I also saw hope and strength in some passages: "We had transcended everything--death, fatigue, our natural needs. We were stronger than cold and hunger, stronger than the guns and the desire to die, doomed and rootless, nothing but numbers, we were the only men on earth."

The way that some of them just kept going when other succumbed to the cold or hunger or brutality made me wonder which group I'd be in if I were in that situation. Hopefully I will never find out.

Reading this now - as hate and prejudice seem poised to take over here in the US - seems somehow appropriate, and a good reminder of how easily hatred can take over. Comparing Trump to Hitler used to seem rather heavy-handed but the more I hear from our current day hatemonger the more I wonder how different he really is. Especially chilling in Night were the passages at the beginning about how unconcerned many people were, and how they refused to listen to someone who had actually seen what was going on. Even Wiesel's own father downplayed the seriousness of the situation when the Jews were told they had to wear yellow stars. "So what? It's not lethal..." Neither is deporting all Muslims from the US. But that's how it starts, doesn't it?

So it is timely, though I think it is always timely to talk about bigotry. But is it the best choice for a Community Read? It's certainly not the worst choice, and obviously has important themes and could generate valuable conversations. However, I think most people read it in high school and in the town where I work it's definitely on the summer reading lists. I know high school is quite a while ago for many of us, but I do like to pick something that everyone hasn't already read.

Still, I'm glad I took the opportunity to revisit this short volume, which I read entirely in one sitting. I do recommend it if you haven't read it before as it's an important work about a time in history that I hope we never repeat.
Posted by 3goodrats at 7:30 AM

I actually haven't read this! I own it because my husband had to read it in college, but I never seem to get to it -- which is dumb because it's so short!

On the topic of WWII books, have you read "All the Light We Cannot See"? I FINALLY read it recently and loved it! The writing was gorgeous and the characters were so unique and dynamic.

I saw your review and I keep hearing great things about it, but just can't bring myself to read yet another WWII book. But perhaps someday the mood will strike me :)