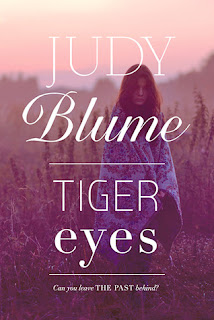 The story opens soon after Davey's father is shot in a holdup at his 7-11. She and her little brother Jason go with their mother to Los Alamos, New Mexico to stay with family while they try to recover. Aunt Bitsy and Uncle Walter are nice enough people, but they're pretty strict. Davey's mother is kind of useless, barely even talking to anyone. Davey decides to explore the local canyons and there she meets a guy named Wolf who is going through something similar, and is only now that Davey begins to understand how to deal with her loss.

I last read this book sometime in the 1980s and at the time it was probably my least favorite of Blume's teen books (meaning I probably only read a few times, rather than many times.) The story didn't really stick with me like the others; I only remembered that it took place in the Southwest. Maybe my taste has changed since I was teenager, because I really liked this story a lot! It's all about how much Davey's family's life changed after her father was killed, and I wonder if I would have liked this more as a teenager had I read it after my father died rather than before.

Davey feels uprooted when they move to Los Alamos away from her friends and boyfriend. She doesn't know how long they'll be there, or what their lives will be like when they return to Atlantic City. She just wants someone in her family to talk to her about her father and what happened, but they won't.

The adults in this book were so incredibly frustrating, as adults can be when you're not one. The family were in New Mexico for at least a few months when Davey finally asked her mother if they'd be home by Christmas. Her mother, who barely talked to Davey AT ALL the entire time they were there, said something like "Oh, I thought you realized - we'll be here for the whole school year." Of course Davey didn't "realize" that. How would she know if her mother didn't talk to her? And Davey's aunt and uncle were also kind of incorrigible. They were nice people, really, but they were SO obsessed with safety that they didn't want to let Davey do anything fun whatsoever, plus they had some negative opinions of Davey's father which did not help Davey's relationship with them. All the while, Davey's mother just kept going along with them as though she could no longer think for herself.

But there were some good things in Los Alamos too. Davey made a new friend Jane (who actually turned out to have some pretty big problems, but was still a good friend to Davey), and Wolf, the guy she met while hiking in the canyon (against the wishes of the overprotective adults.) Davey also got a volunteer job as a candy striper at a local hospital where she befriend a patient named Mr. Ortiz who was dying of cancer. All of these things helped Davey come to grips with the tragedy she had lived through.

I felt so bad for Davey, having to figure everything out for herself because the adults around her (and her little brother) wouldn't even talk about her father. But she was so great, getting out there and meeting friends and doing volunteer work. There's so much more going on in this book than I remembered, and it's so much better than I expected based on my vague childhood memories. I'm so glad I read it again!
Posted by 3goodrats at 7:30 AM