How to Build a Girl 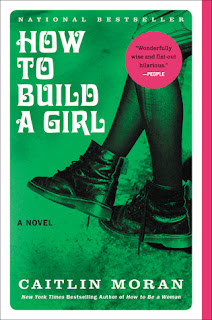 Johanna Morrigan lives with her family in council housing in Wolverhampton. She has an older brother (Krissi), a much younger brother (Lupin), and her mother has just given birth to an unexpected set of twins, still unnamed at 3 weeks of age. Johanna is obsessed with losing her virginity, and after accidentally revealing to a neighbor that he family receives benefits is now afraid they'll lose them. When she humiliates herself on national TV, Johanna decides it's time to reinvent herself. She starts dressing in black, renames herself Dolly Wilde, and gets a job writing music reviews for a magazine in London, eventually quitting school so she can devote all her time to her job, drinking, sex, and carousing. But is the persona she has created actually a better version of herself, or is it worse?

Oh my gosh, Caitlin Moran, is anyone funnier than you? I'll be the first to admit that the plot of this novel doesn't really hold up. For one thing, a teenage girl walks into an interview at a music magazine and is offered a job before she even sits down? But that doesn't really matter. The beauty of this novel is how relatable Johanna is and how hilariously she expresses herself. She is always screwing up, in the ways we've all screwed up when we were teenagers, but the recognizes the freedom of being able to decide what kind of person you want to be. Early on in her transformation she says, "As soon as I actually find something to believe in, I'm going to believe in it more than anyone has ever believed in anything, ever."

I loved the dissonance in Dolly Wilde. She's a goth girl who swigs MD 20/20 while talking about jazz and saying things like "We must away to pastures new." I loved how incongruous her language was with the character she had created for herself. She was unapologetically smart and literary (when she makes a literary reference, the citation is included!) even though she had adopted the persona of a drinking, smoking, swearing Lady Sex Adventuress. She also has the not-terribly-uncommon problem of the bookish of pronouncing words incorrectly because she's only ever seen them in print, and it only adds to her charm.

Although she spends lots of time carousing in London, for most of the novel she's still living at home in Wolverhampton with her family. Her father has spent most of his life trying (but not very hard) to make it as a musician and is constantly asking her to help him out now that she knows people in the industry. Her relationship with her brother Krissi is a little antagonistic,  but they're also each other's best friend. She also has a very sweet relationship with her little brother Lupin.

Moran's writing is just as funny in this book as she was in How To Be a Woman, and her language is just as strong. (If you can't tolerate the word "c*nt" you should probably skip it.) I'm not bothered by the language and I love her smart, cutting humor and strong feminist slant. Johanna Morrigan is a character I won't soon forget.
Posted by 3goodrats at 7:30 AM