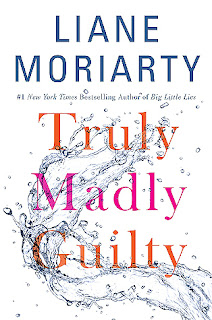 Clementine and Erika have been best friends since childhood, though it's clear the friendship is uneven and complicated. Clementine is a cellist and around the time of the barbecue she was preparing for an important audition; her husband, Sam, had just begun a fantastic new job. Along with them at the barbecue were their two little girls, Holly and Ruby. Erika and her husband Oliver, both of them meticulous and nerdy, are at a turning point in their lives and need Clementine's help. Vid and Tiffany are the hosts of the barbecue, along with their 10-year-old daughter Dakota. It was just an ordinary day. Three couples, three kids, and a dog at an ordinary barbecue. But something went wrong and it changed everyone's lives.

Chapters move back and forth between the day of the barbecue and present day, which is a couple of months later. It's clear that something life-changing happened that day, but not clear what that is. The whole event and its aftermath is revealed over the course of the book, maddeningly slowly at times, but it didn't matter - I was hooked. Thankfully you do learn basically what happens before it gets too late in the book, but there is more to be revealed. I was glad I didn't have to wait until the very end to find out what happened, though I really was very happy to just read about these characters and their other issues in the meantime.

Erika was fascinating, from her troubled childhood to her current life, satisfying but under conditions of immense control and order. Her husband, Oliver, also had a difficult childhood and I loved how devoted they were to each other, how understanding and forgiving of the other's issues. It was like they were the only people in the world who truly understood the other and there was no question that they would be together. Erika's friendship with Clementine was fraught with obligation and guilt, but they knew each other better than anyone. That friendship continues to develop in unexpected ways in this story. Vid and Tiffany are just neighbors, but the interpersonal dynamics between them and the other characters is a catalyst for what happened, and definitely for the guilt a few of the attendees felt afterward.

Much of what I love about Moriarty's writing is in the little details - the humor, the observations, things I've never really said out loud or consciously thought about but immediately recognize. When someone is overheard saying something awful, "She kept talking, talking as if she could somehow conceal what she'd said with layers of new conversation." In another part, Vid is described coming home: "There was a mark on the wall from where Vid threw it open each time he came into the house as if he were making a grand return from an epic journey." Someone in my household also bursts through doors in a dramatic way and she really characterized it well. Many parts like this made me chuckle in recognition.

The reviews were quite mixed and honestly I have no idea what the hell is wrong with book critics. I loved Big Little Lies and this one was at least as good, possibly better. Although the subject matter is more serious, I think those who enjoyed Curtis Sittenfeld's Eligible from earlier this year would also like Truly Madly Guilty.
Posted by 3goodrats at 7:30 AM