Moral Disorder and Other Stories by Margaret Atwood (2006) 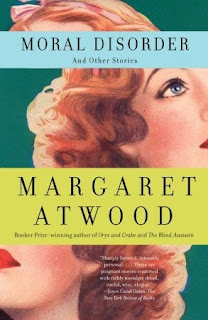 This collection of short stories follows one character from her childhood through adulthood. Born in the 1930s, Nell grew into a young women in the 50s and became involved with a married man who she later moved in with, settling down to have a family on a farm. The eleven stories are from different parts of Nell's life, and some are told in third person while others are in first person from Nell's point of view.

I started reading these stories occasionally between other books when I wanted a palate cleanser, and dipping in and out with long stretches of time in between meant that I realized embarrassingly late that the stories were all about one woman. (In my defense, her name isn't revealed in every story.) I had been feeling lukewarm about this collection, but once I realized it was all part of one big story, it really clicked for me. Suddenly, for instance, one story that had seemed boring was now recast in my mind as a lovely little vignette in the life of this person who I actually did know other things about.

The trajectory of Nell's life is sort of fascinating. She befriends a couple, Oona and Tig, and it becomes clear that their marriage is not great. It's a pretty open marriage and this point, and Oona is clearly pushing Nells towards Tig. So they begin a relationship and Tig moves to a farm, Nell eventually following. As their relationship gets more settled, Oona begins falling apart and Nell ultimately ends up sort of taking care of her.

My favorite was the title story, "Moral Disorder," in which Nell and Tig leave the farm they've been renting and buy their own. There is plenty of space for Tig's kids, and Nell begins gardening and they acquire lots of animals they didn't intend to get. This is new to all of them, and farm animals mean difficult and messy and violent things happen that you just need to accept. Meanwhile, their relationship is a bit strained because of Nell's desire to have a baby. I really liked everything about the details of this new life, which was a change for both of them. Farming was new, but their relationship also took on a permanence that it didn't have before. Of course Oona was still around since she is the kids' mother, but her role was changing. This story felt like the turning point in the book in a couple of ways - Nell and Tig's relationship really coming together, and my realization that the stories were all connected. I really liked it a lot from here on out!

But even some of the earlier stories were memorable. In "The Art of Cooking and Serving," eleven-year-old Nell is trying to help out at home while her mother is pregnant. She is diligently knitting a layette, and studying a book of homemaking advice. Once the baby is born, she is stuck caring for her younger sister, her mother lost in a seemingly-endless postpartum depression. In "The Headless Horseman," Nell works really hard on a Halloween costume that didn't quite work out (this was my life before I finally gave up on Halloween altogether.) I loved the description of her teachers in "My Last Duchess," all dressed in matching skirt suits with brooches on the left-hand lapels. The most fashionable was Miss Bessie, also the most sharp-witted with the highest expectations.

Although this wasn't my favorite Margaret Atwood book, the ultimate effect was to make me want to read more of Atwood's writing. I've fallen behind, not yet having read The Heart Goes Last, which came out last year. This October will see publication of The Hag-Seed, a retelling of The Tempest. I should definitely check it out, since I'll be reading, and watching a performance of, The Tempest later this year as part of my Bardathon Challenge.

Have you read this collection? Have you read The Heart Goes Last? What is your favorite work of Margaret Atwood?
Posted by 3goodrats at 7:30 AM