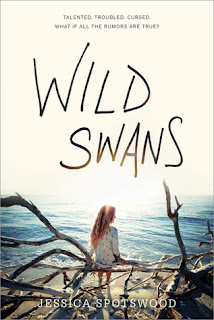 Milbourn women are extraordinary, but it has come with the price of early, tragic death. Ivy Milbourn doesn't think she'll ever live up to the expectations of her grandfather and achieve the greatness of her grandmother and the women who came before her, but maybe that means she'll also escape the family curse. At any rate, this summer she's done with all the extracurriculars, the classes and activities her grandpa has pushed at her in hopes of finding some hidden talent. This summer, Ivy is just going to be a regular teenage girl and party with her friends and swim and have fun. That is, until her mother - who abandoned Ivy as a baby - returns to town with two other daughters in tow.

My biggest fear when I was anticipating this book was regarding the fact that it's it's contemporary fiction and therefore will be nothing like The Cahill Witch Chronicles, Jessica Spotwood's series about three witch sisters with an ominous prophecy. Much to my delight, Wild Swans opened with the story of the Milbourn family curse. This immediately put my fears at ease and drew me into the story and soon I had forgotten all about my worries.

Ivy was great. I totally get her frustration about not having a thing she excels at. I've never had pressure to be extraordinary at anything, but I always thought it would be nice to be really good at something. It sucks when you keep trying a ton of different things and are only ok at all of them. I can only imagine how much worse it must be with the pressure of such accomplished ancestors hanging over your head. Ivy is kind of introverted but still sometimes goes out with friends, and she attends some local bonfire parties and even drinks (though not to excess.) She loses her head a bit over a boy named Connor who is one of her grandfather's students and I like she got carried away a little with him. She was so realistic to me. She was also kind of dorky in the best way, with her summer job at the library and the way she responded to stress by signing up for a college-level French class.

Ivy had two best friends, Claire and Abby. They were both good friends but I especially loved Claire. She was openly bisexual and was frustrated at the assumptions people made about her, but instead of feeling bad or internalizing these ideas, she worked hard to refute them. Claire knew what she was all about and was confident and not afraid to say what was on her mind. She was also very protective of her friends and unapologetically feminist, offering such as advice as "We do not give blow jobs so that boys will like us!" She made me laugh out loud more than once, and I really, really want her to be the protagonist of Jessica Spotswood's next novel. (I have maybe already contacted her with this request. Maybe.)

The cast of characters was quite diverse, actually. In addition to Claire, Abby's younger sibling is possibly transgender, and neither of Ivy's potential love interests are white; one is Mexican-American and the other biracial.  This book isn't about issues of diversity, it's not about race or gender or sexual orientation, but rather just happens to be populated by a variety of people who are different from each other. You know, like in real life.

Fundamentally, this book is about Ivy and her family, and how she feels about the way she fits into it and the way that they treat each other. She has huge issues with her mother - as would anyone who was abandoned as a child - but also maybe with her Granddad who has been raising her all this time. Not to mention the difficulties with her half-sisters who didn't even know that she existed. There is a romance story here too, and I like it, but it takes a back seat to the other parts of the story because this isn't a romance novel.

Despite my intense love of The Cahill Witch Chronicles, I was not at all disappointed by this new novel, which I devoured in just two days. It was wonderfully satisfying. And now I have to patiently wait for Jessica Spotswood to write her next book. (Hopefully starring Claire.) Perhaps in the meantime I'll pick up A Tyranny of Petticoats, a book of short stories that Spotswood edited that features fiction about badass women. If you're ever looking for some feminist fiction for teens, you will not be disappointed by this author.
Posted by 3goodrats at 7:30 AM