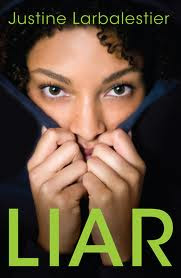 We are introduced to Micah when her boyfriend doesn’t show up at school one Monday…or Tuesday…or Wednesday. On Thursday the principal comes into her classroom to tell them that Zach’s body has been found. Nobody asks Micah how she is doing because they don’t know she was Zach’s girlfriend. Sarah was Zach’s real girlfriend, Micah was just for after hours. She continues to pretend that she barely knew Zach at all, and mourns alone.

The story flips back and forth between “Before” and “After” as Micah shares bits and pieces of her life. She relates that when she first started at this school she pretended to be a boy until she was eventually exposed. She reveals a bit about a family illness from which she suffers. She shares stories from her relationship from Zach. Meanwhile she is trying to cope with Zach’s death, reaching out to his girlfriend and his best friend. She also struggles with family problems as her parents try to convince her to go live with relatives on their farm.

And then we find that much of what she is sharing are lies. Clearly, Micah is having a hard time telling the truth, and possibly even distinguishing for herself what is truth and what is a lie. There is a twist about halfway through the book that is a complete game-changer and puts this book firmly in a genre that I didn’t realize it was. Had I known about this I probably wouldn’t have picked it up, but I’m glad I did.

There are some fun and unusual aspects to the book that added to its appeal. First, and most notably, the characters aren’t all white. Most young adult books are about white kids, so it was refreshing that Micah was of mixed race (her father is black and her mother white) and her boyfriend Zach was hispanic. It’s not integral to the story but she does mention some of the racial aspects of her high school, and it does make this novel stand out a bit from most YA fare.

I really enjoyed the settings as well. Micah’s family live in a TINY apartment in New York, so small that they store their bicycles suspended over the kitchen table. Micah’s escape was to go running with Zach in Central Park. In the summers Micah went to her family’s farm out in the country where they didn’t even have electricity, a big change from her life in New York. The way each of the settings was described gave the novel an unusual feel.

Micah was a difficult character to like. It’s hard to even get to know her because of her extensive web of lies about herself. Usually I like stories with an unreliable narrator, but as this book went on that aspect of it became a bit wearying, and there is so much that you never really know for sure. Ultimately, I didn’t love it but I liked it and I’d certainly try out another book by this author. If you are in the mood for an unusual book with many surprises, Liar might be right up your alley.
Posted by 3goodrats at 10:26 AM