A Short History of Nearly Everything

A Short History of Nearly Everything by Bill Bryson (2003) 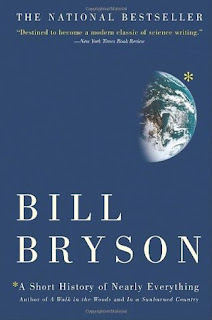 Well, I kind of regretted putting this on my list for the TBR Pile Challenge, but all the same I was determined to finish it once I started. It's a condensed history of everything, but everything in the sense of what exists rather than events: space, the earth, life. Chapters focus on topics such as the solar system, measuring the earth, cells, plate tectonics, DNA, and extinct animals. The subject matter is vast and specific at the same time, and all explored with Bryson's trademark wit and conversational style.

It is often, but not always, about the how. For instance, there's a whole chapter about the history of attempts to measure the size of the Earth and how it was done and the scientists who did it. On the other hand, it tells us what the Earth's mantle is made of but doesn't tell us how that was discovered, though it does say we've never dug down that far. Sometimes we learn a lot about the scientists and how they went about their discoveries, yet learn little of what they discovered. I wish the book was one or the other - the history of scientific discovery or the actual content - but instead it's sort of an inconsistent hodgepodge. In a way I liked it, since the more academic scientific parts were broken up by stories about people, but the overall effect was uneven. Rather than a blend of the content and how we know it, it was more a patchwork of the two with a lot left out.

Bryson covered so much it is really crammed in there, and I fear that little of it will actually stick with me. Just as I was gaining an understanding of one thing, it moved on to something else. A better way to read this would probably be to do so very slowly, putting it down to research things a little more elsewhere before moving on to the next chapter. But if you know anything about me it's that I don't have patience for that sort of thing.

Definitely not the sort of patience displayed by scientists who spend the better part of their career studying, say, slime molds. I was struck by how dedicated some of these people were to learning everything about their little corner of the world. If only I could be so focused on one thing. Another thing I can't help but notice whenever I read about great people of the past is how much leisure time they apparently had to pursue their interests. It seems that quite a number of these men (for the majority were men) had independent means to support them while they caroused about looking at mosses and shooting birds into extinction in order to study them.

It was a little under 500 pages, which is pretty doable but still kind of a slog. I definitely enjoyed it in parts and feel more interested in someday reading some more focused books about the natural world. For now, though, I'm really looking forward to reading a novel.
Posted by 3goodrats at 11:31 AM