The Immortalists by Chloe Benjamin (2018) 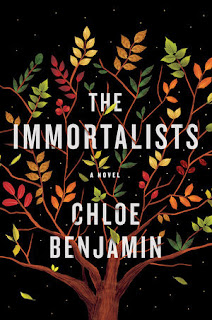 This book has been super popular for a while now and I haven't even read any of the reviews (which are apparently mixed), but I was very drawn in by the premise. Four young siblings visit a fortune teller who reveals the dates of their deaths, and the novel follows them through their lives. That was all I knew - it's intriguing, but would the story live up to this idea?

The novel begins with a chapter introducing us to the siblings when they were between the ages of 7 and 13. In descending age, they are Varya, Daniel, Klara, and Simon. One of them heard from a friend that a mysterious woman told her family when her grandmother would die, and it gave them all an opportunity to say goodbye to her and be prepared. The kids were intrigued and I think it was Daniel who convinced the others that they needed to visit this woman. They tracked her down and she took them into her apartment one by one and told them what they wanted to know.

The next four sections follow each of the siblings. First, Simon, who leaves home at the age of 16 for San Francisco in 1978 where he becomes a dancer. Then Klara, who follows her passion to be a magician. In the third section we learn that Daniel is a doctor who works for the military. Finally, Varya is a scientist studying longevity. Although they don't discuss their dates and sometimes seem to forget that visit altogether, it becomes clear that the choices they make - and their ultimate fates - are influenced by that information.

Although it's this idea that holds the story together, much of the pleasure is in reading about the lives of the siblings and becoming immersed in their worlds. And they're all so different. Simon's story is of a young man finally free of his family, who finds the gay community in San Francisco and revels it in. He originally goes there with Klara, who is driven to pursue magic, refining her art and finding a partner in life and business in a man named Raj. She struggles between her artistic vision and the kind of performance that will earn them a living. Daniel was most elusive character to me. We meet adult Daniel when he has been suspended from his job. He evaluates people going into the military to determine whether or not they are fit to serve. He does his job honestly, but it's clear his superiors want as many people approved to serve as possible. This event, combined with a visit from someone investigating the death of one of his siblings, sets him off in a downward spiral. Throughout most of the book we don't hear a lot about Varya; but it is her story that I think will stick with me. She works in a lab performing longevity experiments on monkeys, but it is clear she is also trying to control every little variable in her own life too. She's obsessed with cleanliness and order to an unhealthy degree, and holds secrets she has kept buried for quite a long time.

You could be the kind of person who believes in fate and read this book and think, yes, the woman was right. The dates of their deaths were predetermined. Or you could be a skeptic and think that they made sure - consciously or unconsciously - that they'd die on the dates they held in their heads. It really gives one a lot to think about.

(Side note: I love the cover. If I'm going to be honest, that was part of what made me want to read it.)

In the end, it absolutely lived up to my expectations. I think it would be great to discuss with a book group too, because you can really spend a lot of time going in circles about destiny and causation and how much control you really have over the trajectory of your life. Fascinating.
Posted by 3goodrats at 8:05 PM