The Wedding Date by Jasmine Guillory (2018), narrated by Janina Edwards 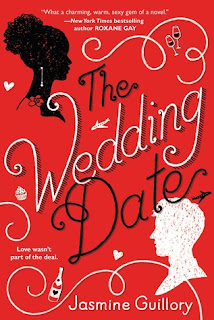 Drew Nichols is in town for his ex-girlfriend's wedding, and his date has cancelled, leaving him to attend alone. But then he gets stuck in an elevator with a stranger, Alexa Monroe, who agrees to pose as his fake girlfriend for the weekend. They have a great time together, after which they both return to their normal lives - his as a pediatric surgeon, and hers as chief of staff to the mayor of Berkley. The weekend stays with them though, and soon they're traveling back and forth most weekends to see each other. But is it just a bit of fun, or something more?

Drew is not the boyfriend type. In fact, he almost always breaks off relationships just when they're getting good. Unfortunately for him, Alexa learns this from some of his exes and tries to preemptively get out of the relationship (is it even a relationship?) before she gets hurt. This is the main point of tension in the story: Drew's reputation as a commitment-phobe vs. their need to be together. There are other, more minor, tensions as well. Alexa is black and Drew is white, and it takes him a bit to realize she would really like to know if she's going to be the only black person at events they attend together. (Oh, not to mention some of the stupid things some of his white acquaintances say to her!) Plus Drew doesn't understand the importance of the youth-at-risk program Alexa is trying to get started because he doesn't realize that some kids really have more privilege than others based on circumstances entirely beyond their control, like race. He's also a terrible communicator. To be honest, he's kind of a jerk? I mean, he's a bit insensitive and more than a bit oblivious.

He's basically a good guy though, and he makes Alexa happy. I do think she's too good for him, but that didn't detract from my enjoyment of their story. And I found their relationship believable. Their problems weren't based on ridiculous neuroses but realistic problems like poor communication and not knowing what each other actually wants out of the relationship.

I liked the arc of their relationship, but one of my favorite things about the story was all the food Drew and Alexa consumed together. Crackers and cheese, tacos, burritos, doughnuts. So many meals and snacks! I always love female characters who have actual appetites like real people and Alexa did not let me down. She didn't try to make herself fit what she thought Drew would like - make no mistake, she was very aware of his type and that she didn't seem to fit, aware of every spare bit of flesh on her body, but that didn't stop her from eating a big dinner.

All in all, it was fun, entertaining, and satisfying. I was invested in Drew and Alexa, their careers, their friendships, and of course their relationship. I listened to the audio version, narrated by Janina Edwards, who did a great job. I've never listened to her before, but I would again. Speaking of which, there is apparently a sequel to this book which stars Drew's friend Carlos, a minor but very endearing character in The Wedding Date. It's not out until fall of 2018 by which time I will have forgotten that it exists and will get excited about it all over again.
Posted by 3goodrats at 7:30 AM