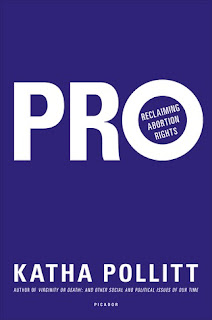 A former coworker, with whom I enjoyed many feminist rants, recommended this book to me a couple of years ago and I put it on my list. Recently I was inspired to finally pick it up after reading a novel in which a character has an abortion, and starting the second season of The Handmaid's Tale.

I've always been pro-choice, from the time I learned that abortion was a thing that existed and that some people thought it shouldn't be allowed. In my case, my position has a lot to do with the fact that I've never been interested in having children (again, from the moment I learned about pregnancy and childbirth I wanted nothing to do with it.) But I know many women who do have children and are still pro-choice and, as Pollitt points out in her book, the majority of women who have abortions already have children.

Pollitt is preaching to the choir, but she lays out her reasoning for maintaining legalized abortion in a way that it would be hard to argue with. (Obviously people will try to, but they won't win on logic.) One of the reasons I no longer engage in debate on this topic is that anti-choice people believe that abortion is murder. I do not. And I don't see any way to get past that fundamental difference. However, Pollitt shows that people who claim to think abortion is murder usually feel that you can make an exception in the case of rape or incest. In which case....it's not murder? You're still removing the embryo that could have grown into a baby, right? But as Pollitt shows, the issue is not so much that people think abortion is murder, but that they think it should be allowed only in circumstances in which they approve. From here, she easily builds her case that it is not about the embryo at all but about controlling women. I've always kind of thought that, but never considered it as comprehensively as she does here.

For instance, middle-class mothers have been pressured to stay home with their children, and shamed for placing importance on their careers and putting their kids in daycare. Meanwhile, poor mothers - many of whom, not coincidentally, are women of color - were under the opposite sort of pressure, being criticized for being on welfare and at home with their kids and expected instead to go to work and spend most of their meager paycheck on child care. This kind of hypocrisy is highlighted again and again throughout the book.

She touches on a lot of issues - women's sexuality, poverty, race - and makes thorough and well-crafted arguments. Ultimately, she wants pro-choice people to stop making excuses. Stop coming up with worst-case scenario situations to justify why abortion needs to remain legal, stop defending Planned Parenthood based on the other services they provide, and just come out and say that we should trust women to make decisions about their own bodies, in any situation.

This book isn't going to sway the minds of the most stalwart anti-choicers, but those are a very small percentage of the population. (Chapter 2: "What Do Americans Think About Abortion?" goes into the numbers in great detail.) It could, however, convince those who approve in some situations but not others that it's ok to get off their high horse and put some trust in responsible adults to make their own decisions. For the rest of us, she's connected the dots and solidifying arguments that could come in quite usefully the next time we decide to open a conversation about abortion, and getting us fired up about protecting our rights.
Posted by 3goodrats at 9:04 PM