Made for Love by Alissa Nutting (2017), narrated by Suzanne Elise Freeman 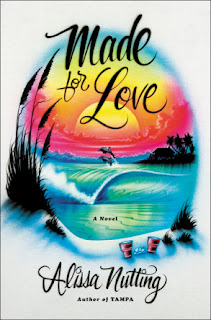 The author of Tampa returns with another novel touching on some quirky and taboo topics, though not as quite as controversial as in her previous novel. When Made for Love begins Hazel has just left her husband, Byron, the CEO of Gogol Industries, a giant technology company infiltrating every aspect of daily life. It was his proposal of a mind-meld that was the last straw for Hazel, already unhappy at being quarantined at the compound for the entirety of their marriage, every move and vital sign tracked and shared with Byron. She goes to the obvious place, her father's home in a senior citizen trailer park. When she arrives, she is greeted by not just her father, but his new "girlfriend," an extremely realistic sex doll named Diane. Now she must come to grips with this new quirk in her father's life, and the fact that her presence isn't entirely welcome, while worrying that Byron will hunt her down and kill her.

A little later we meet Jasper, a con artist who plays a long game, convincing women he is in love with them and then stealing their money. He depends on sex for his income, but after a freak accident while swimming, he is only attracted to dolphins. Stay with me here. It's ridiculous, but so hilarious, and I couldn't wait to find out how his story intersected with Hazel's. It did so in a very satisfying and entertaining way.

Hazel was sort of an unlikeable protagonist, but it was easy to sympathize with her. Directionless and unappreciated, when Byron took an interest in her she was easily swayed into a relationship. It was shocking that someone so wealthy and powerful and well-known was interested in someone so uninteresting and unliked, and so what if she wasn't especially drawn to him? I think their marriage lasted around a decade, during which Hazel grew to dislike Byron more and more, and I think matured a bit herself. When she left, sure that he would have her killed, she still felt like it would be better to die free than to live in captivity.

There's so much more to say about this zany story, but recounting the plot in detail won't really get across what is appealing about the book. Sure, there were lots of strange surprises, but it is more about the telling, and I think the audio version served it well with a narrator whose even - almost deadpan - delivery was the perfect way to convey Hazel and Jasper and their stories.

So much about this book was ridiculous - the sex dolls, Jasper's dolphin attraction - but it was such fun! I didn't know what to expect from Nutting's sophomore novel, but it exceeded my expectations. I think this solidifies her as an author I will officially read anything from.
Posted by 3goodrats at 7:23 AM