From Here To Eternity

From Here to Eternity: Traveling the World to Find the Good Death by Caitlin Doughty (2017) 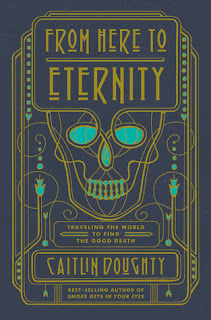 After reading Smoke Gets In Your Eyes, I was very excited to hear that Caitlin Doughty had another book coming out. I follow her on Twitter too, and everything she writes is very thoughtful and interesting and gives me new perspectives on how death is viewed in our society.

From Here to Eternity is a journey around the world as Doughty witnesses death rituals in various cultures. It begins in Colorado with an outdoor cremation on a pyre, very different from the behind-closed-doors-with-special-equipment kind of cremation that is the norm in the US. Then to Tana Toraja, Indonesia for ma'nene,' a yearly ritual in which bodies of the dead are exhumed, dressed up, and walked around town. She goes to Mexico for Días de los Muertos, Day of the Dead, when the line between the living and dead dissolves and families welcome their deceased with altars and offerings of food. In North Carolina she visits the site of the Urban Death Project, an experiment in composting human remains. She travels to Barcelona, Spain where families can view their deceased loved ones at their funerals, but only behind glass. And graves aren't permanent resting places, but rented spaces where, once your lease is up, your body is transferred to a mass grave. Japan has a 99.9% cremation rate, and cremains are stored in a super-organized high-tech building in which you can scan a card and a crystal Buddha on the wall will light up to indicate where your loved one is being stored. After a cremation comes a ritual called kotsuage in which families are presented with the fragmented skeleton of their person, and they use chopsticks to pick up the pieces and put it in an urn. In Bolivia, many people collect ñatitas, skulls that are believed to have special power connecting the living and the dead. Our trip comes to an end in California with a natural burial conducted by Doughty's funeral home, and then she meditates a bit on other methods of burial and expresses her wish for a "sky burial" in which a body is cut up to be picked clean by vultures.

Her overarching theme is about all the different ways there are to mourn someone's passing and to treat their body, and her sadness that in the West our rituals are now controlled by business. In fact, she notes that after Hurricane Katrina, a group of Benedictine monks began selling low-cost handmade caskets and were challenged by the local Board of Embalmers and Funeral Directors (though the courts sided with the right of the monks to sell caskets.) There's a lot of control over how our death rituals work. The open pyre in the first chapter is an exception to the rule, and there are a lot of rules. We're removed from death, we can't usually witness a cremation; in fact, as soon as a person is just a body they are whisked out of sight and we can't see them until they've been embalmed and made up by professionals. She says that the Western funeral industry likes to talk about dignity, but to them the word seems to mean rigid formality that doesn't take into account how an individual or family actually wants to mourn their person.

Her companion when she visited Mexico, another American named Sarah, had lost a baby rather far along in pregnancy. She felt pressure to keep silent in her grief so as not to depress others. In Mexico, she saw many altars and elaborate grave sites with mementos and photos of the deceased, including children. The pride with which the dead were remembered and celebrated was so different from what she experienced in the US.

Some of the rituals explored in this book might seem strange and off-putting to those of us used to the sterile standoffish customs we're used to, but there's a lot to be said for spending time with a body, or picking up fragments of bone with chopsticks. It's a way to confront the realities of death rather than avoid them, and having a ritual is for some people a productive way to channel their grief. Even if you don't want to have a natural burial or personally handle a family member's body after they've died, it's enlightening to understand why other people do.
Posted by 3goodrats at 2:58 PM