A Closed and Common Orbit 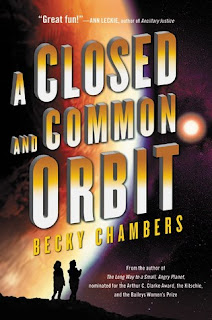 As soon as possible after finishing The Long Way to a Small Angry Planet, I picked up the next book in the series. I read it in just two days (and now I'm on hold for the third one, but it just came out so I'm going to have to sit tight and wait my turn.) This one is about a couple of side characters from the first book, but I'll describe it without spoilers so don't worry about that.

Pepper is an engineer who has befriend an AI (Artificial Intelligence) and put her in a body kit. This means that an AI designed to monitor a ship is now living in a very human-like body. So the AI goes to live with Pepper and her partner Blue and tries to get used to her new situation. She picks the name Sidra for herself, and she is completely disoriented and frustrated by the fact that she can't see behind her, that she isn't permanently attached to the Linkings (which is like the internet), and she just doesn't know what to do with herself. Plus it's illegal to house an AI in a body kit, so she needs to do a very convincing job of acting human.

The other story being told at the same time is Pepper's backstory, from back when she was known as Jane 23. Her early life was spent in a factory, where she sorted scrap, determining what could be useful and what wasn't. She slept in a dorm with other girls, sharing a bunk with Jane 64. Their meals were just liquid in a cup, referred to only as "meals" and Jane had no idea there were different kinds of foods. The girls were watched over by the Mothers, which were robots. Obviously she escaped and it's a really fantastic story that I loved reading about, but I'm not going to ruin things by telling you all about it here.

We don't see any of the other characters from the first book, but I'm ok with that because there's just so much good story here and I grew to love being with these characters just as I did my old friends from book one. There weren't as many different species introduced here, but we got to see more slices of life, and I'm starting to think Becky Chambers can just keep writing more and more books set in this universe and I will never grow tired of learning about these characters, their worlds, and their histories. I can't wait to get my hands on book three!
Posted by 3goodrats at 8:55 AM