The Song of Achilles

The Song of Achilles by Madeline Miller (2012) 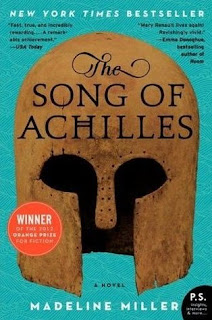 Patroclus is an awkward young man who commits a violent act and is exiled for it. He's taken in by a king who welcomes youth with nowhere else to go, and it is here that Patroclus meets the king's son, Achilles. They become constant companions, and eventually realize they are much more than friends. They spend an idyllic couple of years in training in the forest with Chiron the centaur, but then are called away to war. Helen of Sparta has been kidnapped and they are expected to go fight to get her back. Achilles is known to be a shining example of a man - fast and strong and brave - and Patroclus promised as a child to come to Helen's defense if it were ever needed.

There is also a prophecy, and Achilles's mother Thetis hates Patroclus and is not happy about their relationship, and the war goes on much longer than anticipated. Oh, and apparently Helen went willingly to Troy in the first place so why are they even fighting?

To start off, I should mention that I know practically nothing about Greek mythology and I was concerned going into this that I'd be lost, but it turns out that the book stands very well on its own. There's no assumed knowledge of anything, though I don't have a good sense what is from the original myths and what Madeline Miller created. I also wasn't sure I would like it because I've never been terribly interested in mythology, but it didn't feel like that was what I was reading. It just felt like I was reading a richly-detailed character-driven historical novel.

Her writing is beautiful and the characters came alive, and I felt like I got to know them and their lives in a way that made them feel so much more real than in the mythology. Gods and goddesses were characters in the story, and somehow she made them fit in, even though it's obvious they are not of this world. I was worried when Achilles and Patroclus left for war, because war is often rather boring and confusing to read about, but I never felt lost during this story. She didn't get too bogged down in the details of battle so that I couldn't see the larger picture of what was going on.

The relationship between Achilles and Patroclus was beautiful and sometimes painful, their future always uncertain, and this was what the book was all about. The war was big, obviously, but it felt like a backdrop to their love story. All the parts about Achilles and his relationship with his mother, their training with Chiron, their friendship with Briseis - a Trojan woman the Greeks captured and whom Achilles claimed so she wouldn't be raped during her captivity - were all great parts of the story, but still seemed to exist only as something that affected Achilles and Patroclus, who were the real focus.

This was on my 2018 TBR Pile Challenge, and if it's still languishing on your TBR pile or list I suggest dusting it off and diving in. It's a great read!
Posted by 3goodrats at 8:18 PM

I've had this one on my Kindle for at least a couple of years. Maybe I'll add it to the next TBR Challenge.
Great review!