Dating You / Hating You

Dating You / Hating You by Christina Lauren (2017) 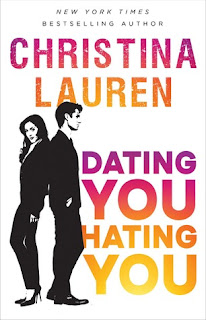 Evie and Carter are Hollywood talent agents, who meet by chance at a party and are very attracted to each other. They both hesitate, because dating another agent is potentially horrible. They work constantly and are always at the beck and call of their clients. One person like that in a relationship is bad enough, but both of them? They'd never see each other. Nevertheless, they can't keep their eyes (and hands) off each other, so they go for it. Then, without warning, their companies have merged and they are now coworkers. Even worse, their horrid boss Brad tells them he won't ultimately be able to keep them both, so now they're basically pitted against each other in a fight to keep a job.

Brad was with Evie's company before the merge so she's very familiar with his ways - his misogynistic, jerkbag ways. Now that she's in direct competition with a man for her job, it's even more glaring. She is clearly the more experienced one, but Brad continues focusing on her one failure, never mind that every agent has had failures, and treating her like more of an assistant than an actual agent. Even Carter is horrified. But that's not enough to keep Evie and Carter on good terms. No, their relationship is now a fight to the death and they begin playing awful (but kind of hilarious) pranks on each other while trying to resist the magnetic pull that won't go away, regardless of their professional situation.

Everything about this was pretty satisfying. The way Evie dealt with her sexist workplace, the dynamic between her and Carter, and the look into a world that I knew nothing about. I've probably spent about 4 seconds of my life thinking about talent agents before reading this book. It's a professional I've only been vaguely aware of. Are there even any other books or movies that focus on talent agents? I'll be honest, it's not something that actually appealed to me and I wouldn't have picked the book up based on the description. I read because I kept hearing how good it was from many different sources from blogs to book review journals. And I know that it's impossible to tell from a plot summary whether something is good or not, so I'm glad let my disinterest about the inner workings of Hollywood put me off.

I'm always happy to find a contemporary romance that works for me. It's not easy - there has to be something keeping people apart, and in the modern worlds that's difficult. The two-author team known as Christina Lauren found a very effective way to create a love/hate relationship that was a lot of fun to watch, and their writing style was clever, funny, and engaging. This book really lived up to the hype for me.
Posted by 3goodrats at 4:17 PM